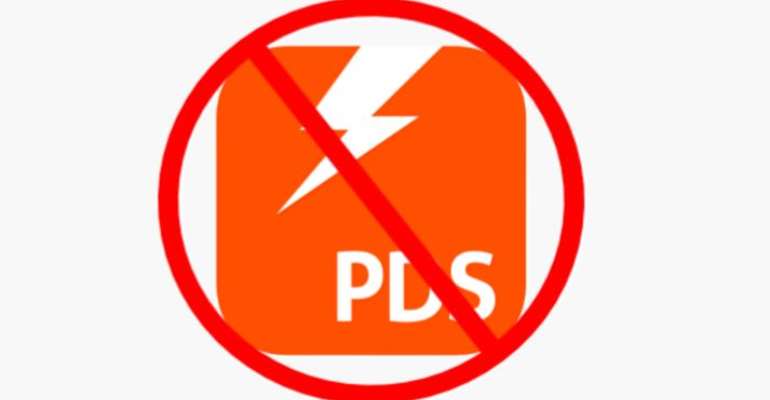 The Institute of Energy Security (IES) has stated that the government's decision to use a restrictive tendering process to select a successor to the Power Distribution Services (PDS) may yield a worse outcome than ever.

A statement released by the think tank and signed by its Executive Director, Paa Kwasi Anamua Sakyi said the termination of the PDS deal comes as a great relief.

Read below the full statement by the IES:

1. The discontinuance of the current stinking and awful Power Distribution Company (PDS) concessionaire agreement by the Government of Ghana (GoG) comes as a great relief to the Institute for Energy Security (IES), and to many Ghanaians who see the agreement as cooked from the very onset for some persons, judging from the manner in which processes were circumvented, with some key Conditions Precedents converted to Conditions Subsequent to allow the take-over.

2. It has become evidently clear that the Millennium Development Authority (MiDA), the supervising agency of the Millennium Challenge Corporation (MCC), which embarked upon a competitive procurement process resulting in the selection of Manila Electric Co. (Meralco), and the group of Ghanaian investors to manage, operate and invest in ECG's operations for 20 years, was negligent in the award of the concession agreement as it failed to do adequate due diligence, resulting in the botched deal.

3.It has also been proven that apart from Meralco, the other parties in the consortium were not known to have both technical and financial capacity to assume the business with a cash flow of close to US$4billion; failing to inject private capital into the operations of the ECG as required.

And to the extent that local shareholders of PDS used proceeds of ECG to fund US$11.5 million of the US$12.5million payments it made to procure the demand guarantees, the Ghanaian was shortchanged.

4. And that based on all the information gathered about the purported Demand Guarantees provided by PDS as security for the transfer, the GoG is concluding that there is no valid Payment Security, and that it is unable to consider that a valid and enforceable Payment Security was furnished by PDS in fulfillment of an essential Condition Precedent for the transfer of ECG's asset to PDS.

5. With these revelations, the IES concludes that the actions and inactions of MIDA has largely contributed to the gross deception and unprofessional conduct on the part of PDS through the false declaration and misrepresentation of facts, resulting in waste of time, loss of money and damage to the reputation of the state.

6. In as much as the government claims to be fervently dedicated to the ECG PSP transaction and fully intends to conclude the PSP transaction within the remaining term of the Compact II Program, it must reconsider the proposal presented to the MCC/MiDA for the adoption of a restricted tender process to fast-track some of the processes to replace PDS.

7. Restrictive tender promotes corruption and cronyism, kills transparency, leads to the high cost of services arrangement, does not provide value for money, and does not give wider alternatives to choose the best company to perform.

8. The “Concession Restoration and Restructuring Plan” which was agreed between the GoG and the MCC, and intended to be executed before December 31, 2019, must be reviewed; especially in the light of Government's admission that the implementation plan sent by the MCC did not accurately reflect the outcome of their meeting in New York.

9. Any attempt to rush the process of restoration is likely to produce a worse outcome than the initial one. And the manner in which the country was forced to take the handing-over decision without necessarily satisfying certain preconditions in the earlier deal, in the name of the deadline given by the MCC, resulted in losses for the country, and this must guide government going forward.

10. The desire to ensure that the country does not lose out on the Compact II must not be the ultimate goal of government, but rather “value for money” in the process of seeking to introduce a private sector participant in the management and operations of ECG.

11. The IES wishes to convey to government to begin exploring other means of getting capital injection into the operations of the ECG, and not be overly fixated on the second MCC which has the government always negotiating from a much weaker position.

12. The IES wishes to remind the Energy Minister Mr. Peter Amewu to honor his word, and proceed to prosecute all those involved in the concession agreement with the PDS, as it has been established that there was a fraud.

The Minister must follow through the initial formal complaint lodged with the Criminal Investigation Division (CID) of the Ghana Police Service now that he is satisfied that the PDS engaged in fraud.

13. That if the country paid $50 million in services, in advice – hiring lawyers, advisors, consultants to help with the take-over process, yet the country ends up with a cancelled deal; it may be of concern to the Special Prosecutor (SP), at least for purposes of “value for money” audit. It must interest the SP to interrogate the extent to which due process was followed in the award of the botched contract.

14. And to the extent that the PDS failed to inject the needed financial capital as stipulated under the concession agreement, but rather depended on ECG's existing funds (including expected payments) for their operations and to shore up their capital requirements, amounts to a clear breach of the transaction and must also interest the SP to call for the file on PDS concession agreement.