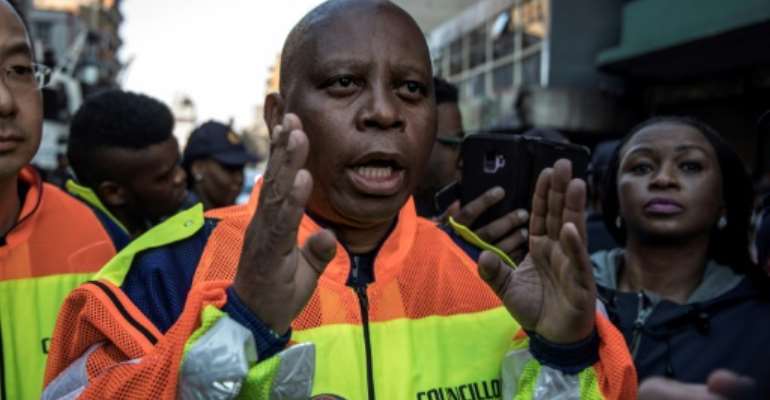 Johannesburg Mayor Herman Mashaba has resigned and quit the DA party in a row over race. By MARCO LONGARI (AFP)

The mayor of South Africa's biggest city Johannesburg resigned on Monday, saying he was stepping down from the main opposition Democratic Alliance (DA) over the party's approach to racial inequality.

When Herman Mashaba was elected in 2016, he became the city's first mayor not from the ruling African National Congress (ANC) since apartheid ended in 1994.

The 60-year-old millionaire, who made his fortune in black hair products, was one of the most senior politicians in the pro-business DA, long considered a party for middle-class white people.

But on Monday he quit the DA, which means he can no longer serve as mayor.

"I cannot reconcile myself with a group of people who believe that race is irrelevant in the discussion of inequality and poverty in South Africa," Mashaba told a press conference in Johannesburg.

He said his decision was sparked by the election of former DA leader Helen Zille as the party's federal council chairperson at the weekend.

The DA has been engulfed by a power struggle between its first black leader Mmusi Maimane -- a close Mashaba ally -- and the old guard, represented by Zille.

Zille has stoked controversy by arguing there were some positive aspects to colonialism.

"The election of Zille as the chairperson of the federal council represents a victory for people in the DA who stand diametrically opposed to my beliefs and value system," Mashaba said.

The DA has struggled to shed its image as a historically white party. Its share of the vote shrunk in elections earlier this year despite numerous scandals plaguing the ANC.

Mashaba said his city government's "pro-poor agenda" was at the heart of the dispute.

"Some members of the DA caucus in Johannesburg have suggested that we prioritise the needs of suburban residents above providing dignity to those forgotten people who remain without basic services 25 years after the end of apartheid," he said.