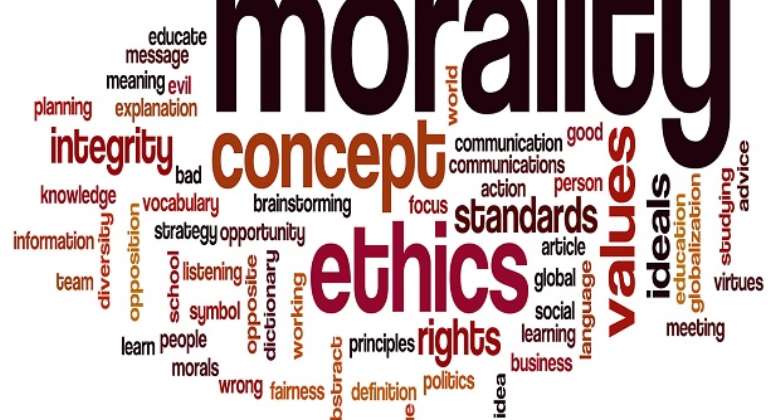 Fibre, as in food, is healthy and good. Every nutritionist says so. Doctors say so; nurses advise that and dieticians prescribe it. Not so with fibrosis in health. It is associated with the harmful, the painful, the injurious and, therefore, with the bad. Fibrous, as say of roots, is many in a cluster, such as the roots of the onion or sugar cane plant. When people talk of moral fibre, I don't know which of the three is or are usually on their minds. I think, though, that it should be all three.

We, as compatriots in the motherland, are a bunch like fibrous roots. We function fibrously. Whatever moral is and of us affects us all. The context is: all fibrous roots are not necessarily of the same length and size. So we assume that moral as fibrous may have to be determined variously. Food may be of high fibre or low fibre. As for fibrosis, it is at different stages. It may be curable or hard to cure; or, maybe even incurable. So, moral must be considered in its different aspects and shades of society as inclusively 'moral fibre.'

Newsmakers make what the news peddlers sell, making things look like all, or the majority of compatriots are against the moral fibre. Take a church. It shouldn't be so difficult defining a church; its harmful aspects to our health such as preacher people pontificating all over the place as custodians and guardians of moral fibre.

Yet, it's hard to pinpoint what religious education has achieved. There's so much corruption. Churches ask banks to be allowed to operate anyhow so tithe will flow. If you have sold your every right for a meal of pottage made of aid you should not complain against anything. It is so much not of moral fibre making it impossible to stop noise nuisance which we spend money employing people and purchasing devices to police.

People claim moral authority, just because they are wearing clothes or have pronounced themselves so. Someone will say some of them are part of whatever problem there is with the moral fibre. The depraved, lawless society is not completely without these holier than thou people; if only they would remove the mote in their eyes. If they can't, they should know and understand others are like them and so like they are not, no one can be law abiding so the lawlessness will continue. The self-appointed preacher-'uprightists' should give us a break. It's not easy understanding that we are all created as flesh and blood but we are not made equal in all senses. LGBTs are also people.

I don't understand why a man married to a man will call himself wife; same why a woman married to a woman will call herself husband. But I still think we should find a sober solution to live and let live the 'unfortunate.' Let's shun the selfishly heartless souls who condemn neighbours to sleepless nights with noise because they want to go to heaven. I thought hell awaits those who choose to love themselves to hate their neighbours without empathy and sympathy which are the keys to salvation. School Health Education Programme (SHEP) has been going on since the 1990s. Why the noise now?

We have been exhibiting same obnoxious attitudes towards our compatriots with disability. Time was when schools for children were closed down for want of government money. Politicians are the easy target for blackmail 'yɛ nnto mma wo' (we won't vote for you). The moral fibre much ado is about hypocrisy and selfishness. I am okay; I don't need to be compassionate, empathetic, sympathetic or feel for others. I wonder which preacher people or church leaders have spared a tiny thought for my left-handed son who was caned into submission to write with the right hand. I can see a left-handers' 'aluta' if that were to happen now.

Compassion is also of the moral fibre. No one or no one group must be allowed to monopolistically define moral fibre on their terms. In the 21st century, you don't leave anyone out of anything owned by all; not definition, not the benefits of society. The days of the tyranny of the majority are long gone. It is the day of inclusion, finding roles, responsibilities, definitions and actions that cover everyone. No hijacking of moral fibre by whoever believe(s) entitlement to that. One is for all and all are for one.

More Feature Article
ModernGhana Links
Galamsey 'madness' Breaks Out In Brazil
Dr. Apaak, Mahama Bankrupted the National Health Insurance Scheme
Special Feature: The luxurious lifestyle of Ghanaians in the Diaspora affiliated with political parties in Ghana
Time To Take Those Planning To Destroy The Atewa Forest Reserve To The ICC?
Rejection Of 2022 Budget: The Majority Failed To Demonstrate Real Leadership
A Pure Publicity Stunt
Foreseeable Risk: Omicron Makes its Viral Debut
Kwesi Pratt May Have a Point, But…
Work on your jobless growth and stop the blame game about unemployment issues to reduce anger — Prof. John Gatsi
TOP STORIES

N/R: Over 300 suspected criminals arrested in military opera...
50 minutes ago