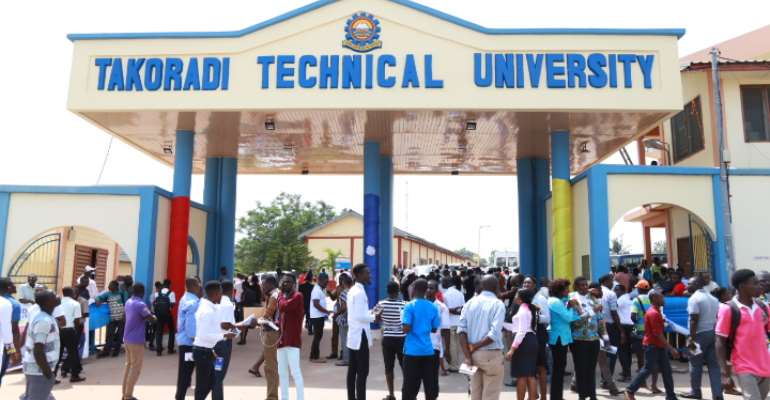 Students in all eight Technical Universities in Ghana have seven days to vacate their various campuses as the industrial action by lecturers reaches its third week.

The closure of the universities will be in accordance with a law that demands closure of educational institutions if academic work halts for more than 21 days.

In an interview with Lord Kweku Sekyi, the General Secretary of Technical University Teachers Association of Ghana (TUTAG), Joseph Danso, said, closure of all technical universities is imminent after failure of government to address issues relating to emoluments of lecturers who have been on strike for two weeks.

According to the General Secretary, even though TUTAG is open to negotiations aimed at resolving the impasse, leadership of the association continues to stand by all the issues and demands raised in their original statement released on October 7, 2019.

It would be recalled that six (6) polytechnics were converted to Technical Universities (TUS) in 2016, by ACT922. The six Technical Universities continue to receive the conditions of service of polytechnics. In 2018 two (2) more polytechnics were converted to TU through ACT 974 which was an amendment to ACT 922. The eight (8) technical universities were subjected to a staff audit which ended in October 2018, with the Minister of Education giving a directive on 21 December 2018 for Fair Wages and Salaries Commission o migrate qualified' staff to the public universities salary structure with immediate effect.

Again, on the 6th of August 2019 the Minister of Finance directed the Controller and Accountant General's Department to pay the requisite emoluments to staff of Technical Universities with effect from 1st August 2019. To our disappointment the payment did not take effect as directed.

Unfortunately, the September 2019 salaries received do not reflect the public university pay structure. You may not believe, that NCTE did staff audit and downgraded the ranks of some staff before their certificates were sent to NAB for verification to determine their status. So as we speak, qualified staff have been rendered unqualified but by the NAB verification most of these do qualify. For instance an Associate Professor has been downgraded to an Assistant Lecturer without the NAB evaluation report. This is an affront to fairness, due diligence and the labour law.

The NCTE as part of the migration process has reviewed the scheme of service of TUs above the standards in other public universities in Ghana. Indeed, an 'iron fist has been applied to TU standards, yet when it comes to receiving the emoluments of the University Lecturer it still remains a mirage. This flies in the face of natural justice and it has the capacity to kill the TU dream.

NCTE is still holding the NAB report in its bosom without any justifiable reason. We demand that it is immediately released for staff to know their fate in order to take the necessary steps to rectify their status. Bear in mind that affected staff were given only three years to upgrade or fulfil requirements.

It should be noted that TUTAG has been very cooperative and has fulfilled all conditions precedent for the implementation of conditions of service for public universities. However, government has failed, refused or neglected to fulfil its part and this has generated uncontrollable tensions at various campuses.

In light of the above, TUTAG has been left with no choice but to embark upon an indefinite strike action to press home our demand on government to implement the conditions of service of public universities for staff of the Technical Universities and the release of the NAB report by NCTE.