Don’t Side With Expatriates To Betray Ghana – Rawlings To Miners 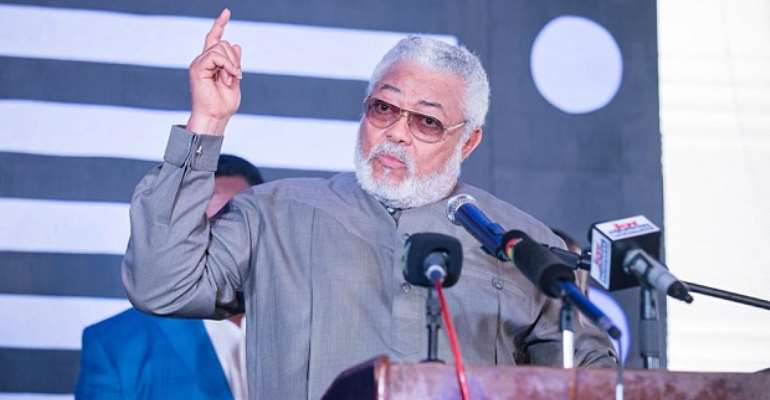 Jerry John Rawlings, former President of the Republic of Ghana

Ex-President Flt. Lt. Jerry John Rawlings has admonished local miners against siding with expatriates to fleece the country in order to satisfy the greed of foreign powers.

He warned miners against the 'dark side' of the extractive industry which he said involved 'machinations' of silencing high-profile personalities who tend to oppose and expose the greedy agenda of foreign powers.

He said, for instance, that through such 'machinations', they nearly succeeded in assassinating his character and would have ultimately paved way for his physical demise when he was leading the country.

Mr. Rawlings gave the caution at a Platinum Awards ceremony on the 75th anniversary of the Mine Workers Union of Ghana held in Accra last Friday.

He was honoured for his contribution to “initiate and implement aggressive policies to stimulate investment into the minerals economy in Ghana.”

The former President gave an instance of how a British businessman, Tinny Rowland, was silenced with the help of a Ghanaian for his fierce critic of western establishments and their agenda for Africa.

“He dared speak the unspoken truth and for that reason became a target of the West. The spear that was used to destroy this great man was in a Ghanaian who had benefitted immensely from Tinny Rowland's mentorship,” he said.

Mr. Rawlings urged locals and traditional rulers to own up and take responsibility for their roles and complacency which have allowed foreigners with semi industrial mining equipment to move across towns and villages into deep Ghanaian forests to practise galamsey.

He also attributed the devastating and incalculable damage of mining on the environment to the failure of security agencies and mining supervisory agencies to enforce laws, notwithstanding the “greedy unpatriotic attitude that has led to the senseless and unbridled abuse of river bodies”.

The former President also mentioned weak institutions, lack of commitment on the part of government due to shallow political expediency and the dearth of noble sentiments among Ghanaians as factors that have compounded the situation.

“If it weren't for greed and the love of power and control over God's creation and freedom, humanity would not have been challenged with global warming,” he pointed out.

The General Secretary of the Trades Union Congress (TUC), Dr. Yaw Baah, encouraged workers to use the occasion to reflect on how to stay relevant in a sector that is fast changing over the decades with the introduction of technology.

The Deputy Minister of Employment and Labour Relations, Bright Wereko-Brobbey, assured workers of the ministry's commitment to address issue of fixed term employment within the sector.

Other dignitaries that were posthumously awarded included the first President of Ghana, Dr. Kwame Nkrumah; Ebow Tawiah, who was a member of the Provisional National Defence Council (PNDC) and Dominic Foevie, an industry giant.

ASEPA to sue Presidency for withholding info on petition for...
28 minutes ago