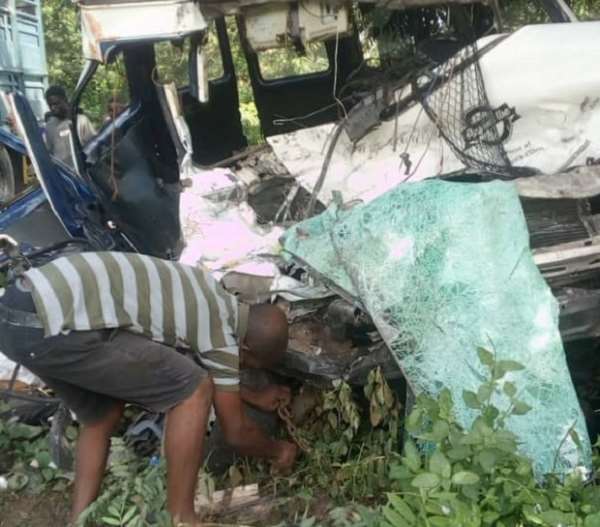 The first accident claimed 10 lives at Gomoa Odumasi on the Kasoa-Winneba highway in the Central Region on Saturday, while the second accident cut short the lives of six people on Sunday morning at Akyem-Nsutam, near Bunso Junction on the Accra-Kumasi highway in the Eastern Region.

The vehicles involved were said to be Benz Sprinter passenger buses and preliminary police reports in both accidents had revealed that excessive speeding coupled with unlawful overtaking caused both accidents.

In the Gomoa Odumasi incident, DAILY GUIDE learnt that it was a head-on collision involving the Sprinter bus with registration WR-211-W travelling from Accra to Cape Coast and an articulated truck in the opposite direction.

According to the police, preliminary investigations revealed that the Sprinter bus driver was allegedly overtaking another car resulting in a heavy collision.

Apart from the deaths, other passengers sustained various degrees of injury, and have since been sent to Apam Catholic Hospital, Winneba Trauma and Specialist Centre, as well as Mankessim Government Hospital.

In the Eastern Region accident, six persons were confirmed dead leaving 12 others injured.

According to the reports, the accident occurred when a Benz Sprinter bus with registration AW 221–14 from Accra to Kumasi route collided head-on with a fully packed cement truck also with registration number GE 1465–12 from Kumasi to Accra.

DAILY GUIDE learnt the Sprinter bus was said to be speeding and in an attempt to overtake other vehicles it collided with the cement truck.

The victims were rushed to the Kyebi Government Hospital and others to Osiem, Hawa Memorial Hospital, for treatment.

The Sprinter driver later claimed he had a burst tyre and lost control. The cement truck driver is also said to be alive.

Unfortunately, a coconut seller was also hurt when the cement truck skidded off the road to hit him.