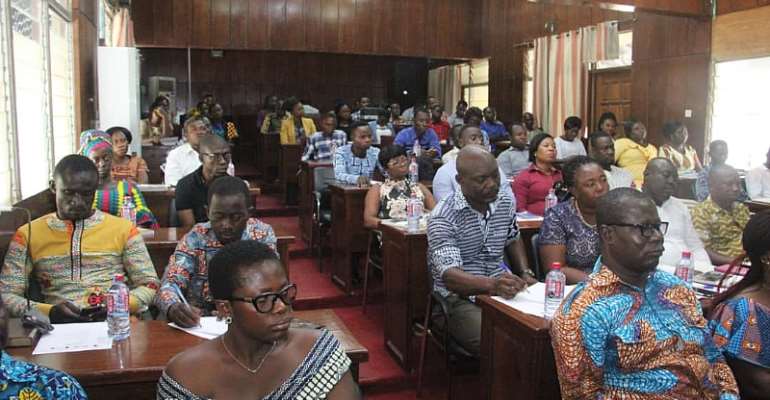 The Ashanti Regional Minister, Honorable Simon Osei Mensah has charged information officers in the Region to campaign vigorously to ensure massive turn out in this year's District level elections and Referendum.

The Minister was speaking at a day's workshop organized by the Information Services Department on Friday, 18th October 2019 for Information Officers in the Ashanti Region. The purpose of the workshop was to orient Information Officers and Commentators on the need to whip up public interest to achieve the required turn-out for the forthcoming Referendum.

The rationale behind the referendum is to Amend Article Article 55(3) of the 1992 Constitution which states that “subject to the provisions of this article, a political party is free to participate in shaping the political will of the people, to disseminate information on political ideas, social and economic programmes of a national character and sponsor candidates for elections to any public office other than to District Assemblies or lower local government units.

The former Member of Parliament for Bosomtwe said two laws ar needed to be amended in the process. He said "Article 243(1) which would take over the power of appointment of MMDCEs from the President to the people, would be amended by two- third of majority votes in Parliament whiles Article 55(3) which is an entrenched clause would need a referendum to pave way for Political parties participation in District level elections ".

The two clauses (1) and (3) when amended, he said, would ensure accountability, deepen democracy and reduce the Winner takes all syndrome which has been a common feature of the 1992 Fourth Republican Constitution.

The Regional Director of Information, Nana Akrasi Sarpong on his part talked about the pedigree of the Information Services Department in terms of disseminating policies and programmes of Government over the years.

He assured of his department's readiness to accomplish the task ahead since in his view, it is a litmus test for the department to get the recognition of Government to undertake subsequent assignments.

He further advised his officers to explain the nitty-gritty of the campaign message to the public to enable the Government achieve the 40% turn-out for the Referendum.

The District Level elections and the referendum are expected to take place on Tuesday, 17th December, 2019 in all the polling stations in the country.