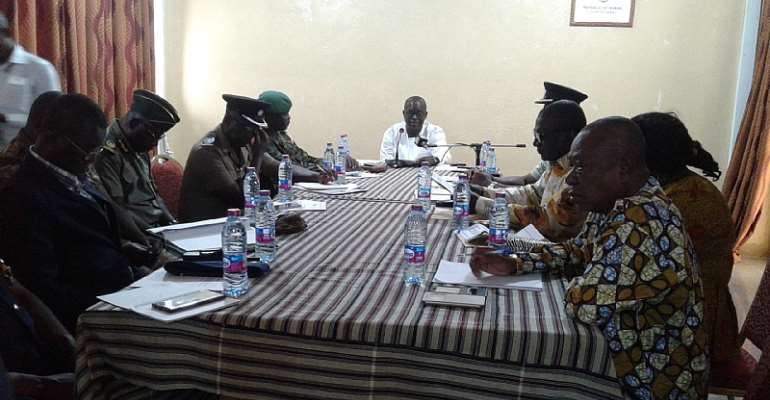 The Electoral Commission (EC) had slated for December 17th, 2019 for the conduct of the District Level Election (DLE) and referendum to amend Article 55 (3) of the 1992 constitution of Ghana to allow political parties to participate in DLEs in the country.

Currently, Article 55 (3) of the 1992 constitution prohibited political parties from participating or sponsoring candidates in the DLEs.

The task force was also to oversee the successful and peaceful conduct of the 2020 Presidential and Parliamentary elections.

Addressing the 12-member task force and some members of the security agencies in the region at a brief event to official outdoor the task force, Dr Bin Salih explained that the Task Force was mandated, to among other things, ensure the overall security of elections, secure the safe transport and storage of ballot materials at police stations and to see to the smooth settlement of election complaints.

“For this Task Force to achieve the aims for which it is formed, members must be prepared to be very objective in the performance of their duties so as to gain the trust and confidence of the people.

We need the co-operation and collaboration of all stakeholders especially political party functionaries, the security personnel, Electoral Commission, the youth, women groups, religious leaders, traditional rulers and the media in our efforts to achieve this goal”, he observed.

Dr Bin Salih noted that, Ghana had gained international recognition as a beacon of democracy since her return to democratic rule in 1992 and emphasised the need to jealously safeguard that enviable title.

He, thus, entreated the public to conduct their political activities and campaigns devoid of insults and abusive language which could mar the peace the nation was currently enjoying.

The Upper West Regional Police Commander and Chairman of the Task Force, DCOP Aboagye Nyarko, said the committee would brainstorm on ways to ensure the successful conduct of election in the region.

He gave the assurance that they would work within the ambit of the law to meet their objectives for the betterment of the general populace.

Bawumia to deliver keynote address at Nottingham University ...
11 minutes ago