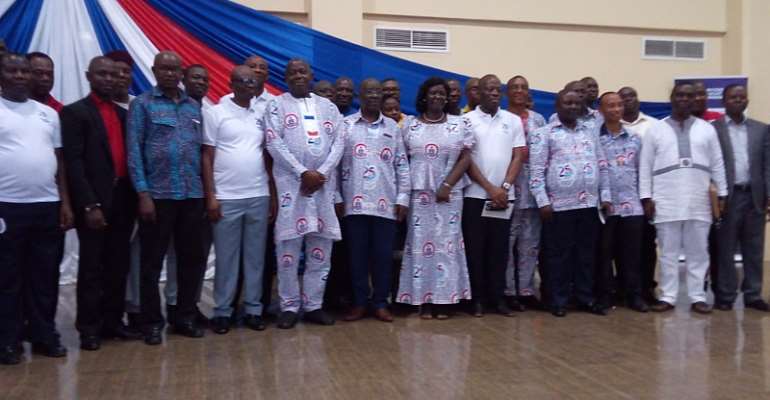 The Vice Chancellor of the University of Education, Winneba, (UEW) Rev. Father Professor Anthony Afful Broni expressed worry how the university spends in excess one million Ghana Cedis from its Internally Generated Funds (IGF) to pay its part time lecturers.

He indicated that the university is managing a shortage of lecturers in the main stream classroom by engaging over 266 teaching staff on part time basis.

Prof Afful Broni added that 1,174 part time teachers have also been engaged at the over 40 study centres.

“About 2,000 employees are currently on our payroll, a shortfall of 93 employees from my previous report and only 26.2% representing 509 are teaching, 7.8% representing 151 are senior members in administration, 27.7% are senior staff and 38.3 representing 744 are Junior staff,” the Vice Chancellor said.

Speaking at the 24th congregation of the university, Professor Afful Broni called on government to as a matter of urgency help address the situation to cease the burden on the school's coffers.

He indicated that the current situation has caused a lot of inconvenience for the school and must be addressed.

According to Afful Broni, despite the university’s challenges in some areas, it has managed to develop into one of Ghana’s fastest growing universities with the current enrollment standing at 85,003.

The university is currently engaged in huge infrastructure development to cater for the huge numbers.

“This year alone, contracts have been awarded for the construction of 10 lecture blocks each to seat 500 students on our Winneba campus and two at the Kumasi campus. The construction works are steadily in progress whereas six of the ten are expected to be commissioned within the next two months, the other four are within six months,” the Vice Chancellor explained.

“There is also the construction of a multipurpose six storey lecture block which has 200 offices with a 30-lecture theatre facility and when completed the infrastructure will assist in solving the long-standing challenge of lack of office space for lecturers and lecture theatres for students,” he further noted.

The Vice Chancellor also explained that the university has had a fruitful institutional review which was conducted by a team from the National Accreditation Board led by the chairman of its board, Professor Kofi Awosabo Asare.

He said the chairman met all faculties and departments to assess the university’s performance over the past five years and examine project development for the next five years adding that accreditation for academic programmes by NAB had also begun and is steadily progressing.

A total of 16,489 students have graduated from the university of Education, Winneba.

Speaking to Citi News at the graduation ceremony, chairman of the Governing Council of UEW, Professor Obeng Mireku, charged the graduands to work hard and be resolute in the discharge of their duties on the job market adding that success does not come on a silver platter.

“As you go out, let your life impact positively on the society in which you find yourselves and leave indelible marks for posterity to benefit as you transit into the real world,” he said.

He advised graduands not to embrace the “get rich quick” attitude of the youth but work hard to make ends meet.

“Never engage yourself with this group and stay away from all social vices but rather join hands in fighting the upsurge of crime, including kidnapping that had reared its ugly head in this country,” he added.

The Chairman of the Governing Council also appealed to the government for financial clearance to recruit more academic staff to meet the expanding population and in anticipation of the large number of senior high school students who will be seeking admission into the university following government’s flagship free SHS initiative.

“This will allow the university to increase the number of students to be admitted” he added.

The university currently does not have alumni executives because the alumni election which was slated for May 11, 2019 was called off due to some misunderstanding among the candidates. Professor Obeng Mireku added that this would be resolved as soon as possible unde the competent administration led by Rev. Father Professor Anthony Afful Bron.

Police hunt for five members of kidnap syndicate in Savannah...
58 minutes ago