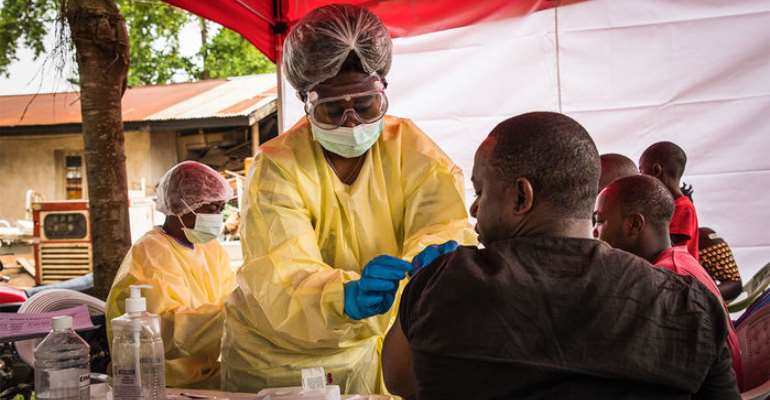 The sky above Eastern Africa turns darker and darker now as Tanzania refuses to share data about potential Ebola patients in their country and the latest Ebola reports of the World Health Organization (WHO) become bigger and bigger.

As of October 8, 2019, a total of 3207 EVD cases were reported, including 3093 confirmed and 114 probable cases, of which 2144 cases died. The organization is concerned because the African country borders on the Democratic Republic of Congo (DRC), where the disease has already claimed at least two thousand lives.

At the end of August, the Ebola virus occurred in the south-eastern Congolese province of South Kivu, increasing the risk of infection for residents of Tanzania. The WHO allegedly submitted several requests to analyze the data to combat the disease, but Tanzanian authorities refused to cooperate, according to the WHO statement.

The WHO previously proclaimed the situation as an "international public health crisis". It is the deadliest outbreak ever for the country. The organization did this only four times before. Exceptionally many children died of Ebola.

There were many children among the fatalities, but the Congolese Ministry of Health was unable to show precise figures. An experimental vaccine is now being used to curb the rise of the Ebola virus.

The attempt encounters many obstacles within the Congolese population since the citizens have little faith in providing assistance.

Congo previously said it regretted Rwanda's decision. "It goes against advice from the World Health Organization (WHO)." The WHO identified the outbreak as an international health crisis last month. Although there is a high risk of regional Ebola spread, it was recommended not to introduce travel and trade restrictions.

Two Ebola patients in Goma have died. The daughter of one of the victims is now the third case of infection in the city with two million inhabitants. The Red Cross calls for major international humanitarian action to stop the outbreak. Assistance in the affected areas is difficult, partly because of the distrust of the population.

Political analyst and writer Alphonse Muambi, currently in the Congolese capital Kinshasa sees another major cause for distrust of aid workers, namely the derogatory attitude of the West towards Africa.

"Western leaders are constantly talking about 'the explosive population growth in Africa', for example in the discussion about migration. French President Macron makes derogatory statements about 'the civilization problem of Africa' where women have an average of seven children."

"At Western embassies in African countries and at all kinds of charity clubs that is also the new goal: how do we reduce the size of the population of Africa? " Said Muambi

The west is attacking us
According to Muambi, you cannot separate these statements from distrust when it comes to combating Ebola. "At the same time, as these statements, you send people with needles and vaccines to the continent. It is logical that people look suspiciously at this, people have the idea: the West is attacking us. Certainly, because Africa has a very ugly history with Europe."

"They also think: if the West wants to pay attention to us, why don't they send people to fight the rebels instead of Ebola?"According to Muambi, mistrust is not only aimed at Western but also at local care providers. "They are seen as soldiers of the west."

"At the start of an Ebola outbreak, it concerns only a relatively small number of people who died from Ebola. But suddenly the World Bank comes with $ 80 million to fight it and international aid workers are brought in, land cruisers drive through the streets.

It leads to a kind of anger and suspicion among the population. People think: we have been dying for years, why are they coming now? When Ebola will soon be under control again, this entire international circus will leave. While we are still dying ".

Fisayo Soyombo is a Nigerian writer and former pioneer editor of Nigerian online newspaper, The Cable, described the plunder of West Africa Ebola funds. In early 2014, when the Ebola virus began ravaging three West African countries, it came with an all-shattering venom.

Although Nigeria, Senegal, Mali, and the Congo were all affected, the real devastation occurred in Liberia, Guinea, and Sierra Leone.

In these three countries, humans were crushed by the virus. Dozens died long before medics reached an understanding of the intruder they were dealing with. Medical facilities were overwhelmed at an alarming rate, already-lean government purses were stretched to the limits, the courage of health workers was tested to the brim, and normal human life was ruined.

The first EVD outbreaks occurred in remote villages in Central Africa, near tropical rainforests. The 2014–2016 outbreak in West Africa was the largest and most complex Ebola outbreak since the virus was first discovered in 1976.

There were more cases and deaths in this outbreak than all others combined. It also spread between countries, starting in Guinea then moving across land borders to Sierra Leone and Liberia. The medical crime was shifted on fruit bats of the Pteropodidae family as the natural Ebola virus hosts.

On October 6, 2018, my co-writer at ‘Secrets Of Aids and Ebola Facts Journal,’ Joel Savage, posted an article: Why Tedros Adhanom Ghebreyesus A Corrupt Health Official – on ModernGhana news site, then on November 21, 2018, I followed with an article: Can Tedros Ghebreyesus Tell The World The Truth About Ebola?

Actually, no matter what problems Africa has gone through, the continent should have been better but the fact that many world leaders collaborate with some corrupt African leaders has worsened the situation in Africa.

Well, below is an article about the corruptible Director of The World Health Organization, Tedros Adhanom Ghebreyesus, which disqualifies him in the first place to be appointed WHO’ Director.

The article entitled; Did The Director Of WHO Committed Crimes Against Humanity? Was released in Dutch by ‘Stichting Vaccinvrij,’ on September 5, 2019.

The Ethiopian Tedros Adhanom Ghebreyesus was elected the new general manager of the World Health Organization (WHO) in Geneva in early 2017. He was protested against his appointment because he was suspected of corruption and was one of the confidants of a repressive regime.

Shortly before his appointment, the Amhara Professionals Union (APU) open letter (see reference below) appeared on the website of the Ethiopian news site 'Ethiopian News and Views' (ECADF). The Amhara are one of the two largest ethnolinguistic groups in Ethiopia (the other group being the Omoro).

The Amhara Professionals Union is a US-based advocacy group consisting of doctors, scientists, and lawyers. Their letter is based on a research report in which 13 points, including discrimination, corruption, crimes against humanity, where 2.5 million people would have been victims, show that Ghebreyesus is not suitable for the position of president of the WHO. The report is no less than 70 pages long.

Reference one: https://bit.ly/35OCVrb
Many negative articles were written about Tedros Adhanom Ghebreyesus, so why is he still in charge? It's because the WHO is in the hands of big money...

Reference two: https://bit.ly/2BzWZjp
But the WHO is also a very corrupt organization and amongst other crimes involved in stealing Ebola blood samples for profits and biowarfare purposes and sex abuse during the Ebola vaccine trial and error studies in the Democratic Republic Congo.

It is most striking that all WHO member states never interfere in WHO criminal behavior which means that they have allowed WHO to commit medical crimes. For the record, all member states associated with WHO is involved.

The WHO is responsible for the World Health Report, the worldwide World Health Survey, and World Health Day. The current Director-General of the WHO Tedros Adhanom, who started his five-year term on July 1, 2017, but as we have noticed there are many negative articles about him as well as two of his friends Bill Gates and George Soros.

The WHO (World Health Organization) deals with the health of the world. A noble goal, but the organization has been struggling for decades with a lack of money. The biggest criticism of the WHO is that instead of helping mankind, it supports the economy.

The WHO is the highest authority on health in the world. It should be an independent organization, but for a very large part, it is financed by one person: Bill Gates.

The 'Bill and Melinda Gates Foundation' has donated more than $ 2 billion to the WHO since the '90s. Gates' hobbyhorse is to eliminate the poliovirus. He wants to achieve that by vaccinating as many children around the world against polio.

He proclaimed the year 2010 as the start of: 'The Decade of Vaccinations.' But we call this decade the beginning of the end for those who receive mostly contaminated or genetic engineered vaccines.

Bill Gates is a businessman and knows that the “global vaccine market” is undergoing rapid growth, which, according to the WHO, will be translated into a turnover of no less than 100 billion dollars a year by 2025 if all goes well.

And the governments? This is particularly sensitive to the wishes of the industries and is not able to effectively protect its citizens against the marketing of downright dangerous products. Yes, dear readers, the power of the multinationals, the lack of government and the growing pressure on healthcare is devasting the world.

Over the past decades, the executives of a few hundred companies have turned the world into their own hands, creating the epidemics of the twenty-first century.

Money can be made out of Ebola vaccines despite the fact that they are absolutely forbidden in western countries except in the Democratic The Republic of Congo. Aids and Ebola arrived in the Congo imported by foreign countries but this time it is different.

This time Ebola is gonna stay forever in the Congo and as we have predicted in many of our articles it first will spread to surrounding countries and then into a world Ebola pandemic will appear with devastating consequences.

Meanwhile, every developed Ebola virus needs it's own vaccine, the reason why many countries such as France, Russia, China, the United States, and China are testing their criminal vaccines on innocent African people.

But in due future, Ebola will strike back worldwide because it is a dangerous biological weapon and rebel groups throughout the Ebola-stricken countries are aware that Ebola virus can be made on their own kitchen table.