October 20, 1970, A Day of Revolutionary Uprising and Enlightenment for the Oppressed; an Anniversary Tribute to SUP! 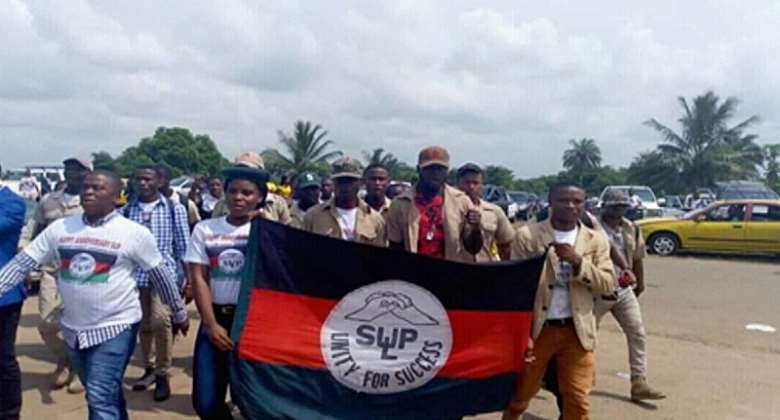 On a cloudy October morning In 1970, sons and daughters of the oppressed and subjugated majority, who were entrenched in social, political and academic deprivation gathered jubilantly on the Capitol Hill Campus of the University of Liberia with the sole purpose of announcing the birth of a massescratic revolutionary institution and the intention of revealing to the country an era of inclusivism, which was about to overshadow the landscape of our country. It was the gathering that did not take into consideration religious, political and traditional alignment, but rather, it was a unified assembling; the minds of those gallant revolutionary icons were made up to break the yokes of nepotism, exclusivism, autocracy, and subjugation.

Before then, an oligarchical totalitarian environment was created by a small group to suppress and oppress those whom they considered as indigenous. This era was unpleasant to the extent that right to education was denied to the YARKPAWOLOS, FUMBAHS, TIPOTEHS, etc, because they were considered as subordinate to the children of the settlers. They feared competition between their children and the indigenes and felt that the only way to suppress them was to institute a counter-productive class system that welcomes the barrel of exclusion and despotism. The system of segregation actually enslaved larger portion of the population. While the Johnson and Roberts were living in exotic mansions on the outskirt of Monrovia and enjoying the luxury of life and acquiring quality education, the Koiboi and Yarsiah were expeditiously hunting wide games in the Belle Yala Forest.

The most intimidating environment to experience such an unscrupulous machination was the University of Liberia where sons and daughters of the indigenes were forced to change their surname to Jones, Stevens or Garrisons before being giving admission to enroll. Even in the mist of their enrollment on pseudo-names and false characterization, they were still treated as outcast because most of them could not forgo their root neither were they willing to be considered as second best.

As subjugation and oppression began a burden too heavy to carry, a small portion of the native students took the authority to dethrone the art of discrimination. They were optimistic of the need for inclusive academic change and as a matter of must; they were now willing to embattle segregation. The wind of change was about to blow across Liberia. Nothing could easily avert the willpower and courage of the few young comrades and compatriots whose dissatisfaction grew at an incongruent rate. A remorseless revolution was imminent as progressive militants organized themselves and planned to reshape an uneven culture of wanton tyrant. The masses were eager for redemption from the ugly system of prejudice and patronage. The oppressive hands of authoritarianism and absolutism were about to be removed not by guns, but by the collectivism, and fortitude. The launch of a new political movement was imminent.

Finally, Chairman Michael G. S. Dolo and some astute comrades came up with the formation of a Pan-African masse base revolutionary institution; an institution that would deprives the opportunists and capitalist barrier of segregation and wipes all forms of indignations from the surface of our social and political landscape. On that day the University of Liberia students felt relieved from the bond of discrimination. A system of counter-revolutionary autocrat was on verge of conquest by sons and daughters that favor inclusivism and equal opportunity. The flag of Marcus Garvey, Kwame Nkrumah and Amilcar Cabral rose contentedly for the first time in Liberia. The Vanguard Student Unification Party came into prominent to preach the message of social justice, academic freedom and peace relentlessly. With 49 years of advocacies in Liberia, we can now boast of an inclusive democracy where multi-party system has succeeded the oligarchical rule of the True Whig Party; education is no longer a privilege but a right, fundamental rights like freedom of speech and others are totally utilized.

This quest could not have been possible without the exuberance and tenacity of comrades like Michael G. S. Dolo, Frederick Gobawolee, Tonia Richardson, Benedict Garlawolu, Wuo Garbbi Tarppia, Weewee Debah, Swanzy Elliot, Irene Nimpson, Chris D. Nyan, Jerome Fromoyan and others who stood tall against all forms of indignities. Many of those comrades were martyred and others went into exile because of their critical stands, but the situation didn’t stray them away from their goal.

Today, I am calling on all SUP’S Ideologues and comrades to lay aside their differences to celebrate the party’s anniversary during this critical epoch. Let the struggle to emancipate the downtrodden from abject poverty remain unabated. Now is the time to embattle the kleptocratic regime of unsophisticated opportunists and economic pillagers. Let us unite in order to foster the one SUP Agenda. Long live MASSESCRACY, long live social justice, academic freedom and peace! The struggle for an egalitarian society remains paramount! HAPPY SUP @49 to all apologists of change.

Ernest S. Barkpalah is a member of the Vanguard Students Unification Party (SUP), and an emerging Agronomist from the University of Liberia. He can be reached via 0776549287/0886833887 or email [email protected]

Hottest Photo Reports
Catch up with all the political quotes from our politicians.
Advertise here
More Article
ModernGhana Links
Ghanaians celebrate Dr. Justice Issah Musah Suguru, a United Nations fellow
UW/R: Traditional authorities, CSOs, youth groups and others support the call for non-partisan election of MMDCEs
The future of Ghana depends on the youth
Meet the black family that once asked U.S. President Joe Biden to support Immigrants
C-KADD Global’s Reflections On 2022 Budget
Transitioning into cybersecurity with Zero IT background
Good Governance and the Fightback Against Africa’s Economic Slowdown
Ghana Can Become A Regional Maritime Hub Through Digitalization
Mr. White Man: A Knock on the Door of an American Ambassador
TOP STORIES