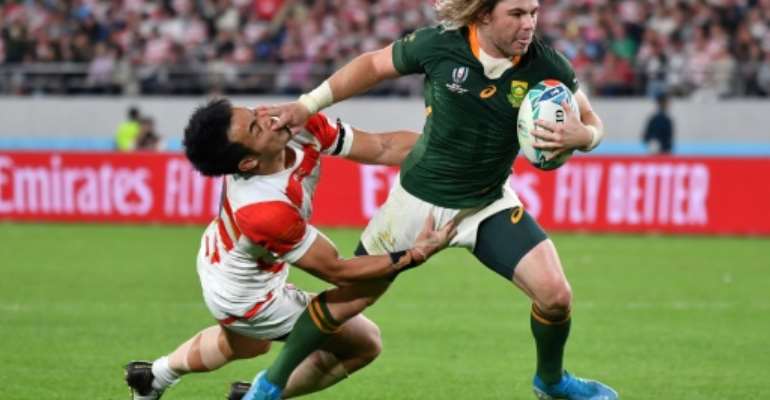 South Africa scrum-half Faf de Klerk led a tackling blitzkrieg to help South Africa snuff out Japan's chance to show off the pace they had to burn out wide in a 26-3 World Cup quarter-final victory on Sunday.

De Klerk produced an outstanding, no-holds-barred individual defensive performance that galvanised a Boks side that led only 5-3 at half-time at Tokyo Stadium.

The 27-year-old joined the exodus of South African players to Europe when he signed for English Premiership outfit Sale in 2017.

He and his current Bok coaches led by Rassie Erasmus credit the move with sharpening his decision-making and improving his kicking game.

Both were on display as well as some much-needed raw defence that starved Japan's touted wingers of possession for much of the first-half.

Instead of free-flowing attack, it was all bone-shuddering tackles, de Klerk charging around like a head hunter, blonde surfer-dude locks making him all the more conspicuous in his man-of-the-match performance.

The Japanese might have had 81 percent of the posession in the first 40 minutes, but they had a sole Yu Tamura penalty to show for their helter-skelter gameplan up against the Bok defensive wall led superbly in midfield by centre duo Damian de Allende and Lukhanyo Am.

The second period saw de Klerk start to play percentage football for the Boks, drilling kicks into the corners and hoping a blitz defence against a tiring Japanese team would force errors.

Just a day after the free-running, offloading brilliance of the All Blacks saw them past Ireland, it was a very different approach by the pragmatic South Africans.

The Boks enjoyed dominance at set piece, competing at Japan's line-out with success and bossing the scrum.

But where they really excelled up front was the driving maul, number eight Duane Vermeulen and giant locks Eben Etzebeth and Lood de Jager the outstanding exponents of a tactic guaranteed to exhaust opposition teams.

Kotaro Matsushima has become the darling of the Japanese and international press with his fleet-footed skills, but Japan's Pretoria-born winger saw little of the ball in space.

It was instead his opposite number Makazole Mapimpi who first got to stretch his legs, fed down the short-side by de Klerk off a scrum and blasting past a terrible Yu Tamura tackle into the corner for the opening try.

It says something about the game when South Africa's own pocket-rocket Cheslin Kolbe's first touch of the ball came after 36 long minutes.

There looked to be a certain second try for Mapimpi as South Africa built a three-on-one on the left, but Am's offload went to ground, a bad miss five minutes before half-time.

Mapimpi was roundly booed by the sell-out partisan crowd when penalised for taking Matsushima out in the air, the Japanese winger perhaps lucky to have got away with one earlier high tackle on his rival.

De Klerk was the recipient of good Malcom Marx offload from a driving maul, skipping away to dive over for South Africa's second try to cap a fine individual game.

And Mapimpi then rode a poor tackle by Matsushima to bag his second with 10 minutes to play and put South Africa in total control, to ensure there was no repeat of Japan's pool victory in the 2015 World Cup.

Springbok eyes instead now turn to a semi-final against Wales in Yokohama next Sunday.