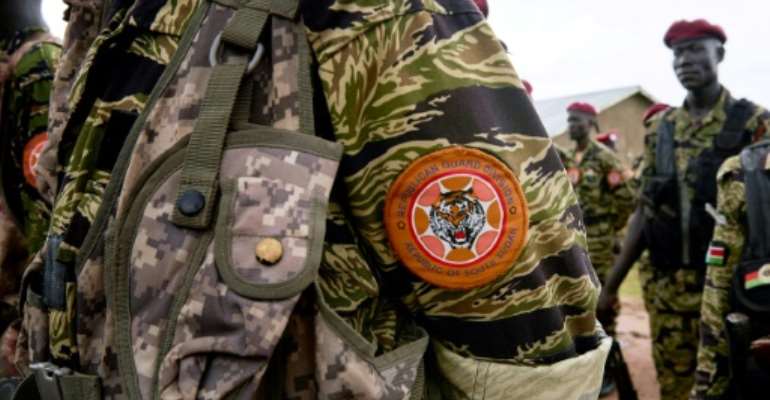 Under an 2018 peace deal, government and opposition fighters are supposed to unify into a single force, but progress has been scant. By Alex McBride (AFP)

Hundreds of South Sudan opposition fighters are leaving cantonment sites set up to register and train them under a deal to end the country's war, claiming lack of food and medical supplies, authorities say.

The process of gathering fighters into military camps with a view to forming an 83,000-strong unified army is a cornerstone of a September 2018 peace deal.

But the operation has been riddled with delays and lack of funding, hampering the readiness of the force.

The problem is one of the major stumbling blocks as a deadline looms on November 12 for President Salva Kiir, his longtime rival Riek Machar and other rebel groups, to form a power-sharing government.

At one of the largest opposition cantonment sites in the village of Pantit near the northern town of Aweil, hundreds of soldiers sleep under trees and are forced to shelter with locals in their mud huts, known as "tukuls," when it rains.

Lieutenant General Nicodemus Deng Deng, who is in charge of the cantonment site, told AFP that it had been over two months since they had received any food.

"The food got finished and now we are left with no food on the ground," said Deng, adding that about 700 registered troops had since left the camp due to the conditions.

Egypt last month sent tents and uniforms to help the cantonment programme, but other donors have been slow to respond. By ALEX MCBRIDE (AFP)

"We do survive on community food, we go to cultivate with them, go and collect groundnuts from their farms as a way of survival," said Deng.

The peace agreement required that at least half of the 83,000 forces be barracked, trained and deployed by September 2019.

Last week the Joint Monitoring and Evaluation Commission (JMEC) which is tasked with overseeing the implementation of the peace agreement, said that of 25 designated opposition cantonment sites, 24 were operational and of 10 barracks for government forces, six were operational.

However registration was still ongoing and training had yet to begin.

William Gallagher, head of the ceasefire monitoring entity CTSAMM, told AFP during a visit to Pantit that it was positive the forces there had been registered.

"However, unfortunately, many of those soldiers that have been registered have since deserted because of unacceptable living conditions," he said.

"It is a very, very, severe problem that thousands and thousands of soldiers and their family members are facing right now across South Sudan at the cantonment sites, without food, mostly without water, and all of them without medicine of some kind and they are desperate, they are angry and they see no solution to the problem."

Japan and China have donated money for water and rice at the cantonment sites, but western donors have been loath to fund the process, with diplomats fearing it could be used as a recruitment exercise, and citing a lack of fiscal transparency from Juba.

Meanwhile the situation at the barracks has heaped pressure on local communities, themselves struggling to survive.

"We have (soldiers) who come to us here and they have no water for drinking and they also don't have jerry cans for collecting water, but we the hosts are also suffering, when... our children fall sick with malaria we don't always get medicine," said 50-year-old Pantit resident, Ajok.

South Sudan's war, which broke out two years after achieving independence in 2011, after a falling out between Kiir and Machar, has left nearly 400,000 dead and displaced nearly four million people.

The International Committee of the Red Cross (ICRC) said last week that while food security has improved, more than half of the population was still going hungry and millions depend on food aid.

Machar arrived in Juba Saturday for another round of talks with Kiir in a bid to salvage the peace deal and resolve the security issue and the thorny question of determining the number of states and their boundaries.