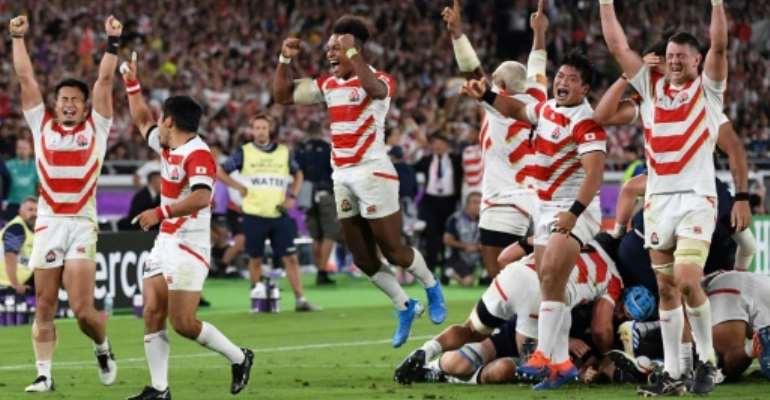 Japan's rugby players have captured the nation's imagination with their fairy-tale run at the world cup. By William WEST (AFP/File)

Millions of home fans will tune in on Sunday as host team Japan bid to extend their Rugby World Cup fairy-tale in a historic quarter-final against South Africa.

The Brave Blossoms' run has captured the Japanese imagination, with nearly 55 million watching their scintillating win over Scotland as they topped their pool, organisers said.

It represented a record for any rugby match in Japan, and outstripped viewing figures for the 2002 World Cup football final held in Yokohama, adjacent to Tokyo.

Now Japan are hoping they can add to their wins over Ireland and Scotland and topple the mighty Springboks -- as they did in their "Miracle of Brighton" victory in 2015, one of rugby's greatest shocks.

Sunday's opening quarter-final features Six Nations champions Wales against France, a repeat of the tense 2011 semi-final when the Welsh had their captain sent off and lost by a point.

"We get a lot of support, especially from Japan," said assistant coach Tony Brown.

Long queues for replica shirts and endless repeats of Japan's wins on TV are testament to the growing excitement around the team.

However, they remain heavy underdogs against an imposing South Africa side, who have set out to bully the Japanese with their massive pack and by naming six forwards among their eight replacements on the bench.

Wales, coached by Warren Gatland, will start as favourites against a mercurial French side in the Rugby World Cup quarter-finals. By Charly TRIBALLEAU (AFP/File)

"I have to use my technique given I'm small. The try (Finn) Russell scored in the Scotland game started off with my mistake so I really felt responsible, and I feel they'll look to attack me in the next game, as well as near the try-line.

"But I've decided to go in determined to play with pride for this team. I'll keep my mind strong. I'll take them on carrying both mind and technique."

Japan's ultra-fast, accurate handling and lightning pace created four highlight-reel tries against Scotland as they won 28-21 to reach the quarter-finals for the first time.

South Africa defence coach Jacques Nienaber said it was a "nice challenge" to work out how to nullify the attacking threat of a side crafted by former All Black Joseph.

"They play a certain style and to their strengths, and they utilise their wings a lot. Their wings won't typically stay on their sides so the style would incorporate them in attack on both sides -- they both work off their touchlines," he said.

"But again it does pose weaknesses as well. If you concede turnovers and both your wingers are on one edge, it means you don't have pace on the other edge.

"So, it does have its benefits. But, like in anything in rugby, for any benefit there is also a counter."

Wales, meanwhile, start as favourites against a mercurial French side which has shown flashes of brilliance among periods of mediocrity.

At the back of their minds will be the stinging defeat eight years ago, when Sam Warburton's early red card ultimately put paid to their hopes of reaching the final for the first time.

"The worst memory is the World Cup semi-final in 2011," said outgoing coach Warren Gatland, when asked about Wales's games with France.

"The best memory? I'm just trying to think... this Sunday?"