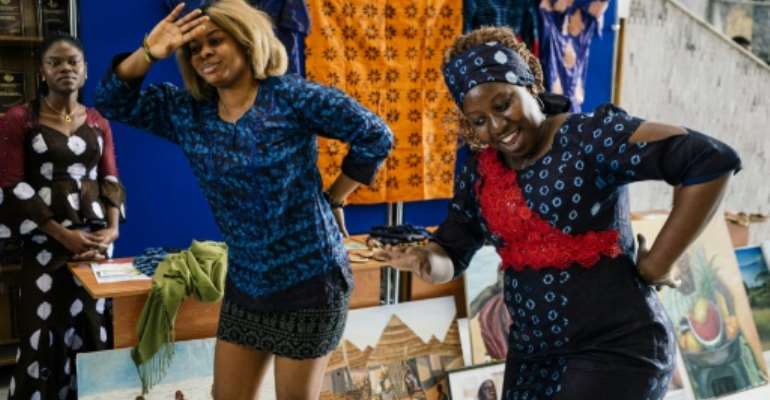 Guinean students are among those attending the Peoples' Friendship University of Russia in Moscow. By Dimitar DILKOFF (AFP)

As the Kremlin seeks to boost ties with Africa, a Moscow university that was a training ground for the continent's elite during the Cold War is once again working to bolster Russia's soft power.

The Peoples' Friendship University of Russia, created in 1960 to improve Soviet ties with developing nations, counts among its alumni top politicians in Rwanda, Uganda, Mali, Chad, Angola, Botswana and other African countries.

But after the collapse of the Soviet Union in 1991, Russia's interest in Africa declined and the institution briefly became better known for skinhead attacks on its students than for building bridges with the continent.

Now, as Moscow prepares for the first Russia-Africa summit on October 23-24, rector Vladimir Filippov says the university is reviving its status as a top destination for young Africans.

Rector Vladimir Filippov says the university is reviving its status as a top destination for young Africans. By Dimitar DILKOFF (AFP)

"Our task -- and the task of Russia as a whole -- is to revive the system that we once had during the Soviet Union" for the advanced training of Russian and foreign students, he said.

Around 1,200 African students are enrolled in the university, which is spread across several campuses in a southern district of Moscow.

During the Soviet period it was known as Patrice Lumumba University after the Congolese independence leader. Today it goes by the Russian acronym RUDN.

In a hall of the grey, Soviet modernist main building, Russian and foreign students mingle as members of the Guinean society dance to traditional music.

Filippov says the university's aim is not simply to attract African students to Russia, but also to export Russian expertise to the continent and vice versa.

Of RUDN's cooperation agreements with 49 African universities, more than 20 were inked in the last two years.

In addition, RUDN has established Russian language centres in Namibia and Zambia.

The rector acknowledged that this increased activity was tied up with Moscow's aim to develop its presence in some African nations.

"Of course it's always a question of geopolitical interests and economics," Filippov said.

The university is meanwhile hoping that some of its Russian students will spend time in Africa after they graduate. At the end of this month, RUDN will host its first "I Want to Work in Africa" careers fair.

The university is spread across several campuses in a southern district of Moscow. By Dimitar DILKOFF (AFP)

The Soviet Union maintained a strong presence in Africa as part of its ideological war with the West, backing liberation movements and sending tens of thousands of advisors to former colonies that had gained independence.

Touting military cooperation, arms deals and investment, Russia is making a comeback on the continent and seeks to rival European countries and even China, analysts say.

Chimuka Singuwa, a 23-year-old Zambian who is working towards a master's degree in international relations and diplomacy at RUDN, said he had the opportunity to study in Russia or China.

He chose Moscow on the advice of his grandfather, who was a student at RUDN in the 1970s.

Singuwa said he had no regrets about passing up on a Chinese education.

"I'm kind of against the 'takeover' of Africa by the Chinese," he said, pointing to the debt Zambia has accumulated with China, its main investor.

Singuwa will travel to the Russian resort town of Sochi to work as a volunteer at the Africa summit, which he described as a "great opportunity" for the regions to develop their relations.

RUDN hit international headlines in 2003 with a dormitory fire that killed 43 foreign students. Arson was never ruled out, and witnesses and rights groups criticised what they said was a slow response to the blaze.

But Singuwa said he had encountered little racism in Moscow.

"In some remote areas in Russia, where there's one foreigner, that's kind of difficult," he said.

Ousmane Setibaye Sou, a 25-year-old undergraduate from Chad, said he had not experienced any racism in Moscow. By Dimitar DILKOFF (AFP)

Ousmane Setibaye Sou, a 25-year-old undergraduate from Chad, told AFP he had come to Moscow expecting racism but had not experienced any.

He said he would like to help develop cultural relations between Russia and his home country.

"There are many people there who speak Russian," he said, adding that dozens of Chadians had been coming to Russia to study every year since the 1970s.

"Even our former prime minister (Yusuf Saleh Abbas) was a student" at RUDN, he said.