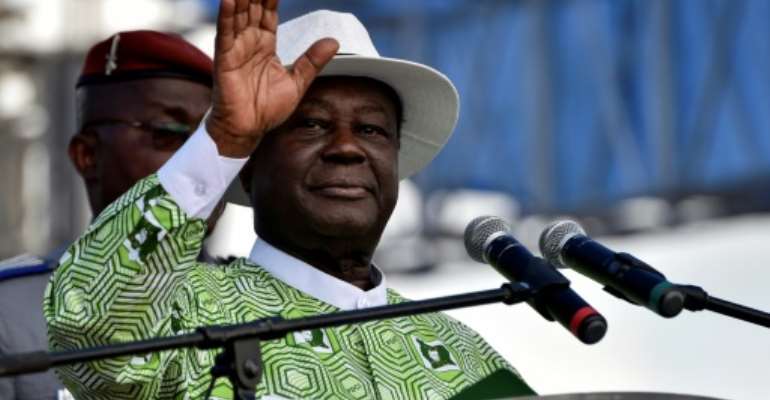 Opposition leader Henri Konan Bedie says he is concerned about the independence of the electoral commission ahead of a presidential election next year. By SIA KAMBOU (AFP)

Tens of thousands of people attended a rally by the opposition Ivorian Democratic Party (PDCI) on Saturday in preparation for next year's presidential election.

Supporters dressed in the party's green and white colours flooded into John Paul II Square in the city of Yamoussoukro, the birthplace of former president and party founder Felix Houphouet-Boigny.

"We are now at a decisive stage before the conference to choose our candidate," PDCI deputy leader Maurice Kakou Guikahue said.

Former Ivory Coast president and party leader Henri Konan Bedie called for reforms to ensure the independence of the electoral commission ahead of the vote.

"Ahead of the next presidential election, the PDCI and its allies are more determined than ever to take up the reins of government," Bedie said.

Ivory Coast is west Africa's top economic performer and is the world's leading cocoa producer but it has struggled with political tensions. By SIA KAMBOU (AFP)

Former Ivory Coast rebel leader Guillaume Soro, also an ex-president of the country's parliament, said Friday he will run in the 2020 presidential poll.

Next year's election is a key challenge for the West African country after its disputed 2010-2011 ballot ended in violence between rival supporters that left 3,000 people dead.

Ivory Coast has long been west Africa's top economic performer and is the world's leading cocoa producer but it has struggled with political tensions.