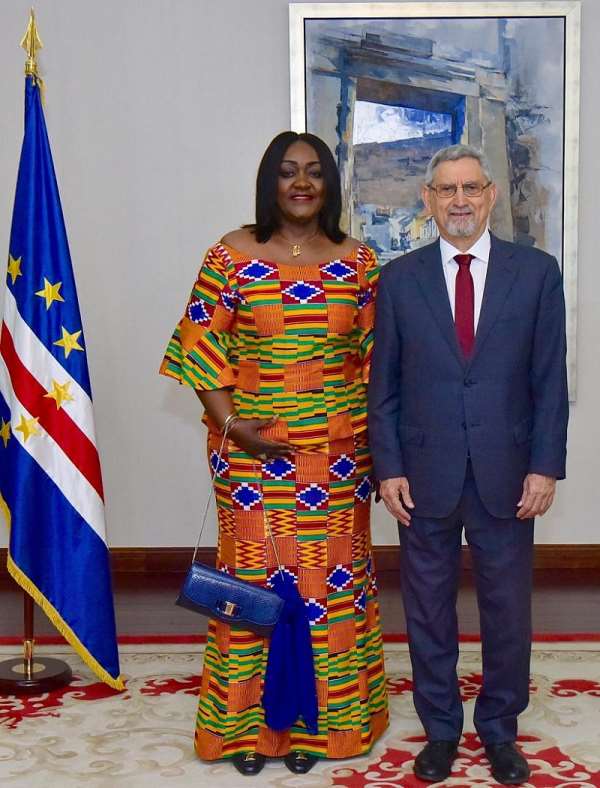 Dakar (Senegal), Oct. 19, – Ghana has proposed for the establishment of a Permanent Joint Commission for Cooperation (PJCC) with Cape Verde to focus mainly on tourism and culture, transport, health, education, fisheries, trade and investment, technology, gender and social inclusion.

Mrs Gloria Poku Ghana’s Ambassador to Senegal told the newsmen later in an interview in Dakar, after presenting her Letters of Credence to President Jorge Carlos Fonseca of Cape Verde at the Presidential Palace in Praia.

She said to cement Ghana’s commitment to the PJCC, a proposed draft Agreement to that effect has been submitted to the Director for Political, Economic and Cultural Affairs at the Cape Verdean Foreign Ministry, Ambassador Julio Morais (in both English and Portuguese), for consideration by the Cape Verdean authority.

The PJCC forms part of a comprehensive modalities rolled out to strengthen bilateral relationship with Cape Verde; Mrs Poku, Ghana's Ambassador to Senegal who also have additional responsibilities over the Gambia and Cape Verde stated.

She said under education, there would be an exchange programme between Ghana and Cape Verde with Ghana sending English teachers to Cape Verde and students from Cape Verdean would again be offered opportunity to study English in Ghana.

Mrs Poku explained that the draft PJCC Agreement is to provide the legal framework for the conduct of the bilateral cooperation between the two West African countries in the relevant areas.

She reiterated President Nana Addo Dankwa Akufo-Addo’s commitment for the two countries to begin the process of developing stronger ties, as well as exploring areas of co-operation to the mutual benefits of their citizens.

She said presenting the Letters of Credence also seeks to deepen cooperation between the two countries as they explore in the areas of fisheries and tourism, for which Cape Verde is noted, through the sharing of expertise and best practices.

The Cape Verdean authorities welcomed the initiatives by Ghana through the Ambassador and undertook to revert with their comments on the proposed Ghana draft Agreement for the attention of the competent Ghanaian authorities.

In order to boost cooperation between the two nations in the tourism sector, the Cape Verdean Minister for Tourism, Transport and Maritime Economy, Mr. Jose da Silva Goncalves disclosed the intention of the Cape Verdean Airlines to add Ghana alongside Nigeria, Cote d’Ivoire to its destinations.

At the moment there is no direct connection between Ghana and Cape Verde by air. The existing flight connections are via Dakar, Senegal or Lisbon, Portugal.

Mr Silva Goncalves said the inclusion of Ghana as a destination by the Cape Verdean Airlines has the potential of opening up the two nations for increased economic, commercial and tourism cooperation, whilst facilitating people-to-people contact.

Ambassador Mrs Poku also used the occasion to discuss areas of bilateral cooperation between Ghana and Cape Verde with the President and other Ministers of some of the Frontline Ministries.