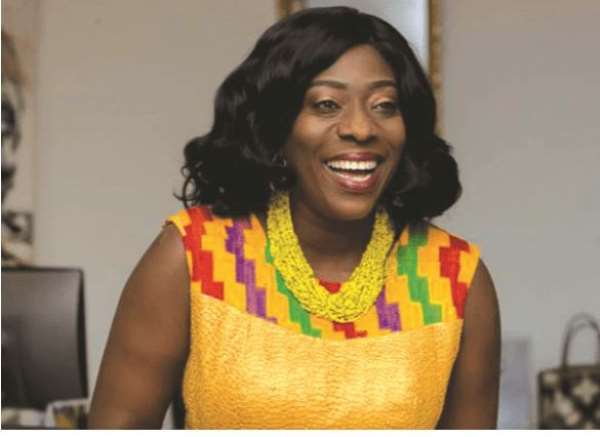 The immediate past Tourism, Culture and Creative Arts Minister, now a Minister of State at the Office of Senior Minister, Catherine Afeku, has been adjudged second best performing Minister in Akufo-Addo-government for the year 2019.

A survey conducted by the Alliance for Social Equity and Public Accountability (ASEPA) and released on Wednesday, said Catherine Afeku had the second marks in its 2019 Ministerial Performance Tracking Report.

Speaking to the media, the Executive Director of ASEPA, Mr. Ernest Thompson, stated why she was ranked second best Performing Minister.

"Catherine Afeku. Her passion for tourism and the general success of the year on return program boosted tourism greatly during the year".

Catherine Afeku was the only female Minister among the top 10 best performing Ministers.

The report which looked at the top 10 best-performing and worst-performing ministers in the Akufo-Addo government, said Mrs Dapaah’s poor performance was based on her inability to address poor sanitation situation in the country.

The Public respondents were sampled from, Civil Societies, the Media, the Clergy, Students, lower and middle-income groups.

The report also recommended for the immediate scrapping of the following Ministries;

The report also called for Immediate Ministerial Reshuffle and merging of some other Ministries.

Speaking to some Constituents in Evalue-Ajomoro Gwira Constituency of Western Region on outcome of the survey, they said the findings were accurate and very authentic.

They added that they were not surprised to see Catherine Afeku, their MP among the top 10 best performing Ministers in the country.

They said she performed well when she was a Tourism Minister and therefore urged her to focus on her new portfolio and work hard to lift up the image of the Constituency higher.