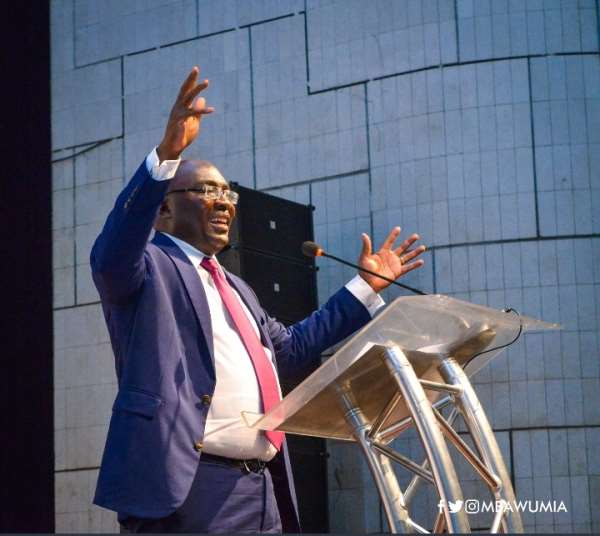 As part of President Akufo-Addo's vision of reducing graduate unemployment in the country, Vice President, Dr. Mahamudu Bawumia has reaffirmed government's policy of prioritizing job creation and introduce social interventions for all citizens.

According to him, this when done will bring to an end the much-talked-about create, loot and share of the country's limited resources by some undeserving individuals.

Speaking on the theme ‘Investing in the youth, securing our future through opportunities for work in nation-building’ at the closing ceremony of the 1 year anniversary of Nation Builder's Corps (NABCO), Dr. Bawumia said "The government of President Akufo-Addo is determined to improve the economy and make available sustainable jobs and also create an enabling environment for job creation".

A year ago, President Akufo-Addo introduced a portal called 'NABCO' to Ghanaians. Although it received a lot of backlash from political opponents, this didn't deter the Akufo-Addo led government in bringing to light the project. The portal received over 100,000 applications where all were interviewed with the best being selected.

He described President Akufo-Addo as a visionary leader who under his leadership is gradually clearing graduate unemployment.

He described NABCO as a lifesaver for the many youth across the country emphasizing that the economy of Ghana was below par.

He added that through the industrious nature of the C.E.O and his Regional Coordinators, they have been able to put critics as well as naysayers wrong.

“They bastardized the policy, told graduates not to sign on the programme among others but they have forgotten they used their monies for Guinea Fowls ‘Akonfem’ in Burkina Faso” he stated.

Vice President urged the trainees to seize the opportunities offered by the scheme to build a better future.

He also noted that the NPP government has been cognizant in the past three years since it believes it has a duty of leading country and provide solutions to challenges.

In an exclusive interview with Modern Ghana, Chief Executive Officer (C.E.O) of NABCO, Dr. Ibrahim Anyars expressed gratitude to the Vice President for believing in his dream.

He added although it is an anniversary, it is also time ti reflect. NABCO is a baby “In May last year, a portal was introduced where people were asked to apply. The intention of this portal was to reduce the rising unemployment problems in the country”.

He said, “ We have paid much attention to the payment of stipends and moving forward, we had asked their leaders to ensure that the minor issues do not repeat itself.”

Dr. Anyars assured that all hundred thousand trainees will be empowered after three years.

He stated the NABCO Skill and Talents which has been launched will boost the learning skills of the Trainees.

He praised the trainees and tasked them to work much harder in the next two years to secure permanent employment in both the private and public sectors.

He called on politicians to do away with the politics and embrace the scheme.

He was confident the next two years will produce geniuses among others.

She said “We are the ones doing the job. I am begging the President to consider us (Starters). I am also urging my other colleagues to make good use of this opportunity because it comes only once”.

A trainee at Kpandai District in the Northern Region thanked the President for the great initiative.

She said “I had challenges when some banks were closed but I have finally been sorted out.

The Volta Regional Coordinator, David Davis lambasted critics saying although this is an NPP project, it has employed both its followers and that of other political parties.

He said “In Volta Region, most of the youths were polluted about this policy and they turned away. The few that joined have proven the naysayers wrong. Those who brushed it aside are now begging to be added but it too late. They have to wait for two more years before they can apply”.