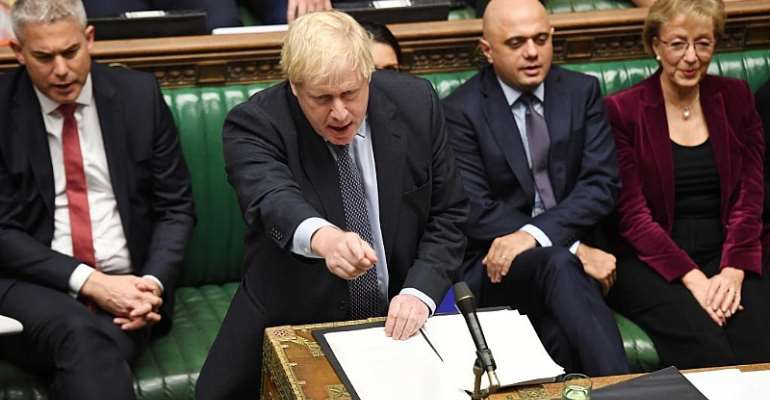 British lawmakers on Saturday voted for a proposal to withhold support for Prime Minister Boris Johnson's Brexit deal until formal ratification legislation has passed, a step that will oblige him to ask the European Union for a Brexit delay.

Lawmakers voted 322-306 for the amendment, put forward by former Conservative lawmaker Oliver Letwin. It means that parliament will not vote this Saturday on whether to approve Prime Minister Boris Johnson's agreement.

Unless Johnson has approved a deal by the end of Saturday, he is obliged by law to ask the EU for a Brexit delay until the end of January 2020.

If Johnson can get all the legislation through parliament, he could still deliver Brexit by 31 October.

Johnson vowed to stick to an October 31 Brexit deadline, despite MPs winning more time to study a divorce deal he struck with Brussels this week.

He told parliament the "meaningful vote" on his divorce agreement with the European Union "has been voided of meaning" but added? "I will not negotiate a delay with the EU, and neither does the law compel me to do so."

Lord Letwin
Oliver Letwin, 63, is a former cabinet minister with a reputation as an unofficial fixer, using his affable manner and procedural knowledge to head off awkward disagreements in parliament. Brexit has given him notoriety as a rebel with a cause: to stop a no-deal Brexit.

The first Saturday sitting of parliament for 37 years was supposed to frame the approval of Johnson's EU divorce deal, but Letwin, expelled by Johnson from the Conservative Party, may have snared the prime minister in a legislative booby-trap.

In a move that indicates the level of suspected perfidy that runs through both sides of the Brexit schism, Letwin proposed a 26-word amendment that, he says, removes any chance of a no-deal Brexit by deferring a decision on Johnson's deal.

The Letwin amendment potentially turns Johnson's Brexit finale on its head by leaving the prime minister exposed to a humiliating obligation to ask the EU for a delay until the end of January 2020.

The tension between the two men was on display on the floor of parliament, a 19th-century gothic palace.

Fixing his eyes on Letwin, Johnson said: “This is a momentous occasion for our country and our parliament, and it would be a great shame if the opportunity to have a meaningful vote ... were to be taken away from us.”

Letwin, standing in the debating chamber clutching a sheaf of parliamentary papers, looked on impassively.

On Voting Day: Media Tasked Not To Rush To Declare Their Own...
6 hours ago