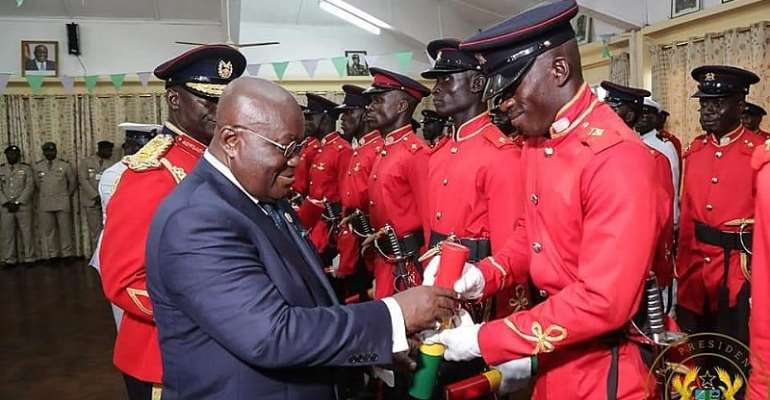 President Nana Addo Dankwa Akufo-Addo, has urged newly commissioned officers of the Ghana Armed Forces to discharge their duties professionally and diligently, fearlessly and efficiently, and act to promote national integration and cohesion.

Speaking at the graduation ceremony of Regular Career Course 59 and Short Service Commission/Special Duties Course 57 Officer Cadets of the Ghana Armed Forces, on Friday, 18th October 2019, President Akufo-Addo urged the new officers to remember that Ghana occupies a respectable and envious position on the world stage.

“We are regarded as a beacon of peace and stability on the continent, and as an established, functioning democracy, and we have pride of place in the area of peacekeeping,” he said.

The President continued, “You are, thus, to guard yourselves against acts that are likely to bring the name of our beloved country and the image of the Ghana Armed Forces into disrepute. Your actions should be to enhance, or, at the very least, maintain the standards set by predecessor generations of officers of the Armed Forces.”

Describing the newly commissioned officers as “fully-fledged, professional military officers”, President Akufo-Addo indicated that the Ghana Armed Forces will demand a lot from them, and so will the Ghanaian people.

“You are joining a profession whose members have not only upheld its image but who also continue to ensure that the territorial integrity of our nation is preserved, thereby reinforcing our independence and sovereignty. In order to execute your onerous obligations, the motto of the Academy, ‘Service, Devotion and Sacrifice’, must always be your guiding principle”, he said.

The President assured newly commissioned officers that Government is not relenting in its efforts at transforming the Ghana Armed Forces into a formidable body, and we will continue to help enhance the capabilities of the Armed Forces in the development of our nation.

He recounted how, in February this year, he presented 50 ANKAI Buses, and 40 Toyota Landcruiser Hardbody Vehicles, 50 Toyota Hilux Pickups, which formed part of the first tranche of 138 staff and operational vehicles of various categories.

Additionally, he noted that steps are being taken to address the accommodation challenges that have been with the Ghana Armed Forces over the years.

“Through the policy of Barracks Regeneration, the sod was cut for a $100 million military housing project, which includes the reconstruction of the Ghana Military Academy. The project involves the construction of 192 two-bedroom flats, 640-unit two-bedroom half-compound houses, and a 240-unit self-contained military hostel,” President Akufo-Addo added.

With the Ghana Military Academy representing the home and spiritual foundation of the Officer Corps of the Ghana Armed Forces, the President reiterated the commitment of Government to transforming it into a world-class institution.

The Barracks Regeneration Project will see the construction at the Military Academy of a new administration office block with 48 offices and conference rooms, a two-storey 240-capacity classroom block, and an auditorium with a 640-seating capacity. Additionally, there will be accommodation for platoon commanders, and a fence wall around the entire Academy.

Government, the President said, continues to support the efforts of the Military High Command in the fight against terrorism and violent extremism.

“In this regard, troops continue to attain further training in counter-terrorism inside and outside the country. Efforts are being made to improve further the equipment and logistical state of the Armed Forces. Thirty-three (33) armoured vehicles have been presented to the Military High Command to help address any shortfalls,” he added.

Ghana, the President stressed, cannot achieve the growth of her economy that will provide the Ghanaian people with a dignified standard of living without peace and stability, and assured that “as your Commander-in-Chief, I promise you that you will be continuously provided with the necessary resources to carry out your roles effectively.”