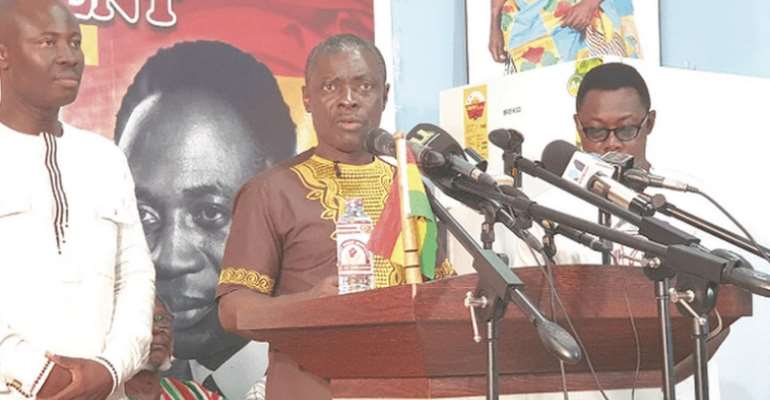 Founder of newly-registered political party, Ghana Union Movement (GUM), Rev. Christian Kwabena Andrews, has called on Ghanaians to end the political duopoly involving the National Democratic Congress (NDC) and the New Patriotic Party (NPP) which has existed since the inception of the 4th Republic in 1992.

Speaking in an interview with United Television (UTV), the General Overseer of Life Assembly Worship Center, popularly known as Osofo Kyiri Abosom, said, even though he supported the then-presidential candidate of the NPP, Nana Addo Dankwa Akufo-Addo, in the round up to the 2016 general election which made him president after two previous attempts, the president has not lived up to expectation as a leader ready to fight corruption and transform the economy.

He referred to the government's One District One Factory (1D1F) programme as a sham; "camouflaged in beautiful language to deceive the masses instead of building real factories to provide employment opportunities for them."

He dared Chairman of Ghana Exim Bank, Kwadwo Boateng Genfi, to produce details about the Ekumfi Pineapple Processing Factory project, adding that, he has video proof that the project is nothing to write home about after a film production crew from his television station, Fire TV, discovered that the facility which was to start production by December 2018 is currently being used to bag sachet water and not pineapple juice as the public was made to believe.

Osofo Kyiri Abosom, who claims to be a trained teacher, said he went into full-time evangelism 8 years after leaving teacher training college in 1992.

According to him, GUM is an embodiment of what Ghana's first president, Kwame Nkrumah lived for, as well as his vision to make Ghana and Africa economically independent through industrialization and modernization.