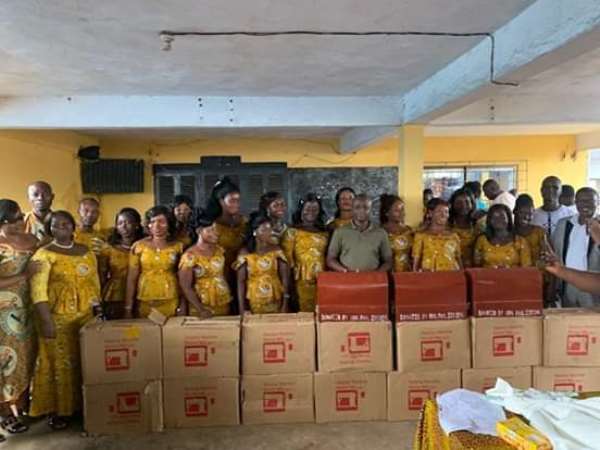 The Member of Parliament for Jomoro Constituency in Western Region, Hon. Paul Essien has donated seventeen (17) sewing machines to seamtresses.

The donation was carried out after the beneficiary girls had gone through a three-year training in dressmaking.

The graduation ceremony was organised by the Ghana National Tailors and Dressmakers Association (GNTDA) at Half Assini.

The donation, forms part of the MP's social policy to help women to operate on their own as well as prevent them from indulging in anti-social practices for a better future.

This is in fulfilment of his 2016 electioneering campaign pledge to support women in his Constituency to be economically independent.

Making the presentation to the graduands, the MP, Hon. Paul Essien commended them for passing through so many difficulties to receive this training.

He also applauded their trainers for devoting their time to train these women to be successful in future.

The MP, who is also a Deputy Minister for Chieftaincy and Religious Affairs, charged the girls to be obedient and respect their clients so that they could get more customers.

He also urged them to put the machines into good use and practically apply what they have learnt very well to make their parents, trainers and themselves proud.

The MP said his outfit was working out some supporting packages to assist those who want to venture into apprenticeship such as hairdressing, tailoring among others to make them economically independent. "I'm burnt on seeing these supports given to my constituents", he said.

"I'm ever ready to support those currently interested to start apprenticeship and cannot pay their acceptance fees", he pledged.

He, however pleaded with the gathering to rally behind President Akufo-Addo and himself to develop the Jomoro Constituency and Ghana at large.

He called on his Constituents to live in peace and harmony.

He urged them to remember him in prayers for him to be strong to bring better opportunities to Jomoro Constituency.

The graduands seized the opportunity to thank the MP for the kind gesture and promised to use the sewing machines to achieve the intended purposes. They also promised to train others to be become successful citizens in the future.

The Member of Parliament for the area was accompanied by the constituency chairman Simon Amoah, and other executive of the governing New Patriotic Party.