Build Yours And Rename It After C.K Tedam, Not Navrongo UDS — Group Protests 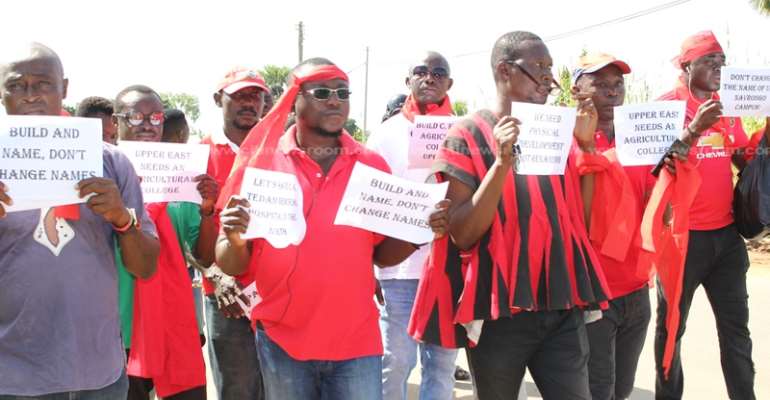 A group calling itself the Concerned Navrongo Citizens for Development in the Kassena-Nankana Municipal is demanding the immediate suspension of plans by Government to rename the now autonomous University for Development Studies, Navrongo campus after the late NPP's C.K. Tedam.

The group on Friday marched on the streets of Navrongo in protest to the change.

President Nana Akufo-Addo on June 22, 2019, announced that the UDS Navrongo campus would be given autonomous status and named C.K. Tedam University for Technology and Applied Sciences.

The Bill for the conversion of the campus was passed in July 2019 but is awaiting presidential assent.

The Wa campus of UD is also in line to conversion into the University of Business and Integrated Development.

“The declaration brought a lot of dissatisfaction among the people of the Upper East Region, especially, given the fact that C.K. Tedam has not contributed to the establishment or development of UDS. Since the pronouncement was made in June 2019 until date, several reactions have emerged from various media platforms and social gatherings and market places expressing dissatisfaction of your proposal.”

“The reasons for the grumbling are not only because C.K. Tedam did not contribute to the development of UDS, but also because C.K. Tedam's contribution to the developmental agenda of the region could not be traced. We are therefore appealing to your Excellency, to suspend the renaming of UDS Navrongo campus after C. K. Tedam and maintain the current name of the University as the University of Technology and Applied Sciences (UTAS)”.

Mr. Terence Adda, however, proposed that a new educational or health infrastructure could be built by President Nana Akufo-Addo and named after C.K. Tedam.

“While we appreciate your decision to make UDS autonomous and also to honour C. K. Tedam for being a ‘Rock’, establishing institutions in the area of health, education and agriculture and naming them after C.K. Tedam will be highly appreciated as these will contribute to improved social-economic wellbeing of the people of Upper East Region and Ghana at large”.