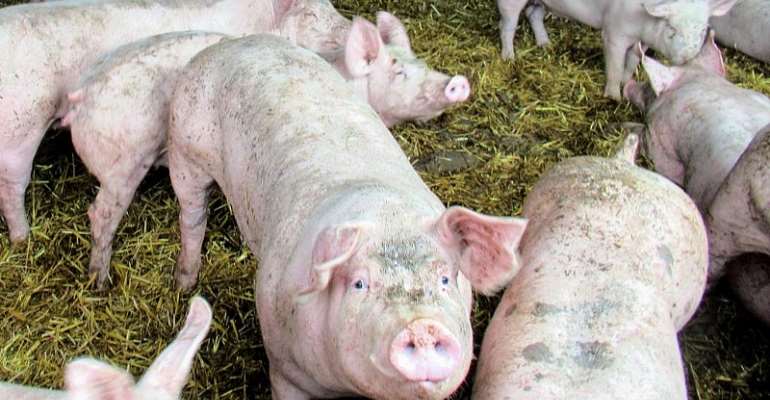 Brittany is France's biggest pork-producing region. With many farms concentrated in a small area, the pigs' waste ends up running into the water supply, feeding a rise in deadly green algae in the English Channel. But because agriculture is such a large part of the region's economy, authorities are hesitant to introduce too many limits. Some farmers have found a solution.

Brittany's 5,775 pig farms are small, but they have a lot of animals. Some 13.9 million pigs were slaughtered in Brittany 2018, or a third of France's pork consumption.

Such a concentration means that nitrates from the pigs' waste, not properly contained or diffused, ends up running into the water supply and into the bays, feeding so-called killer seaweed that has been washing up on Breton beaches.

Pig farming in Brittany has evolved in such a way that it would be difficult to reduce the number of animals on each farm. But some farmers have been successfully experimenting with a method, which is surprisingly low-tech: straw.

Every two days, Yannick Denoual spends 20 minutes putting hay down in his pig barn. He pushes hay bales down from platforms above each of the six stalls in the barn, and lays it out for the 250 pigs.

This might not seem unusual, but for a pig farmer in Brittany, it's almost revolutionary.

A more standard pig barn has the animals on slatted floors, so their waste drops to a trough below to be siphoned off. Denoual's pigs root around in a thick, mucky layer of straw mixed with manure.

Denoual started using straw in 2004, encouraged by an association called the Coherance network, which has found that the method better contains the nitrates in the manure.

Pig waste is used on fields, as fertilizer. Manure siphoned off from a regular pig farm is runny and liquid.

“If you don't have a way to stock [the waste], then you spread it in the fields in the winter, and with the rain, it washes into the river right away,” explains Denoual.

Straw acts as a kind of sponge. When Denoual takes the manure out of his barn, it's a solid mixture of straw and waste. He can spread it in his fields, and the nitrates leach out slower, used by the plants instead of running directly into the water.

Straw is also better for the animals, says Denoual, and his customers care. He sells his products directly to consumers, and he says the arrival of mad cow disease in France in the 1990s made people aware of how animals were being raised.

“People started looking at what we were doing with our animals, both what they were eating, and their comfort,” he says.

Denoual receives young pigs when they are 70 days old and weigh 30 kilograms. He keeps them in his barn, fattening them for up to seven months, until they reach 120 kilos.

He produces 800 pigs a year, around a third of the average Breton pig farmer. But even with fewer animals, he has to work more with the pigs.

Laying out straw takes him time every few days, plus he has to muck out the stalls every month or two. A regular pig barn takes a couple of hours to clean out: you rinse it down, and the water runs through the troughs below the floor.

Without the troughs and siphons, Denoual spends a lot more time.

“It takes me about two days, to empty and wash the barn, then remove the manure, take it to the fields and spread it out. I do it about six times a year,” he says.

The extra work means his costs of production are ten to 20 per cent higher than a more standard way of raising pigs.

Also, pigs are sensitive to temperature variations. Denoual's barn has canvas sides to allow him to go in and out of the stalls easier to clean them out. But that means the outside air comes in.

“We have bred pigs so much that they have become a bit fragile. Pigs do not like drafts. If they get too cold, they can start coughing,” he explains.

And indeed, some of his pigs are coughing. A sick pig eats less, and fattens up slower. Denoual says his pigs spend six to seven months in his barn before they are ready for slaughter. A regular farm will have them out in five months.

Different kind of business
Denoual has built his business to absorb these extra costs. He took over the farm from his parents, who had already started selling directly to consumers.

Today, very little of his production ends up in supermarkets. He sells to restaurants, and has built a kitchen to make the ham and sausage himself on the farm, which he sells in the store on site, that is open twice a week.

He has found that customers are willing to pay more: “People understand that there are products made in such a way that they cost more, and they will have to pay more for them.”

Denoual hopes to expand, but not so much that he is unable to process his pork himself.

Entering the more standard, mass-market food chain would not be possible. The extra work and costs are difficult to scale up, in particular for a cut-throat industry like meat, where margins are very small and farmers have faced economic problems in the past.

Denoual also raises another issue that could limit the expansion of straw-raised pork: the straw itself. With so many pigs, you need a lot of straw.

“I use about 20 hectares of straw for my pigs. That's a lot. Imagine someone with 2,000 pigs. They'd need 60 to 80 hectares, just for straw. They might not have that kind of land, so would have to find the straw elsewhere,” he says.

Brittany's issue with pigs and nitrates leaching into the water is one of intense farming, which is what has developed in the region and will be difficult to shift overnight.

Activists and environmentalists, concerned about algae blooms resulting from the nitrates, say farmers need financial and technical support, and especially, education. The alternative techniques, like raising pigs on straw, need to be taught early, so people know what they can do differently.