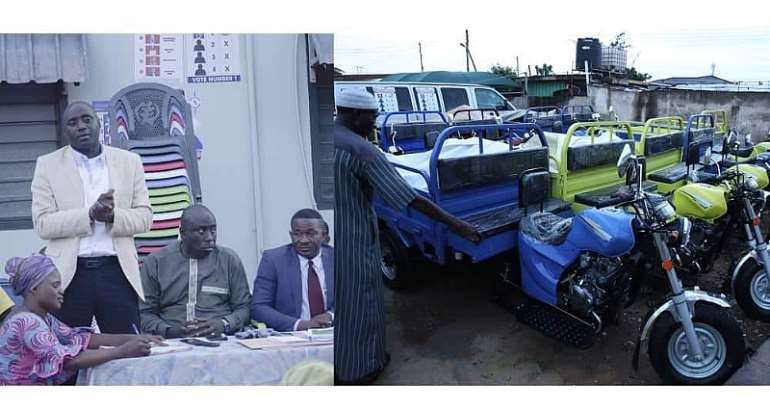 Alhaji Manaf Osumanu, the NPP Parliamentary Candidate elect for the Ayawaso North Constituency in the Greater Accra Region, has donated tricycles to each of the 10 Electoral Area Coordinators in the Constituency.

The donation, he said, is in fulfilment of his campaign promise to the party's delegates prior to the September 28 primaries of the party, which saw him overwhelmingly elected as the party's parliamentary candidate for the constituency in the 2020 general elections.

Alhaji Manaf assured them that he remains resolute in his quest to resource party structures at the grassroots and make them more effective in the buildup to the 2020 General Elections.

He expressed the hope that the tricycles shall be used for the purpose they were purchased and donated for, so as to help generate more income for the party at the constituency level.

He once again thanked them for giving him the mandate to stand on the party's ticket for the 2020 parliamentary elections.

The candidate expressed optimism that the elephant party will annex the Ayawaso north parliamentary seat from the opposition NDC.

The Ayawaso North constituency which was carved from the Ayawaso East has been a stronghold of the NDC since the creation of the constituency prior to the 2012 general elections.

Alhaji Manaf is however, confident the good people of Ayawaso North will vote for him and the NPP to represent them at Parliament.

He is upbeat on changing the voting pattern in favour of the ruling NPP to ensure that for the first time the NPP represents the constituency at the legislature.

The Ayawaso North NPP Constituency Chairman, Mr. Mahmud Hussein, who received the items on behalf of the Ward Coordinators, thanked the parliamentary candidate for the kind gesture.

He promised that the tricycles shall be put to good use to help generate extra income for the constituency thereby making the party vibrant and active in the area.

According to the Chairman, the tricycles have come at an appropriate time as the party is preparing for the 2020 general elections.

Chairman Mahmud, popularly referred to as Chairman Heavy Dee, said the tricycles will help in minimizing some of the challenges bedevilling the constituency during electioneering times and beyond.