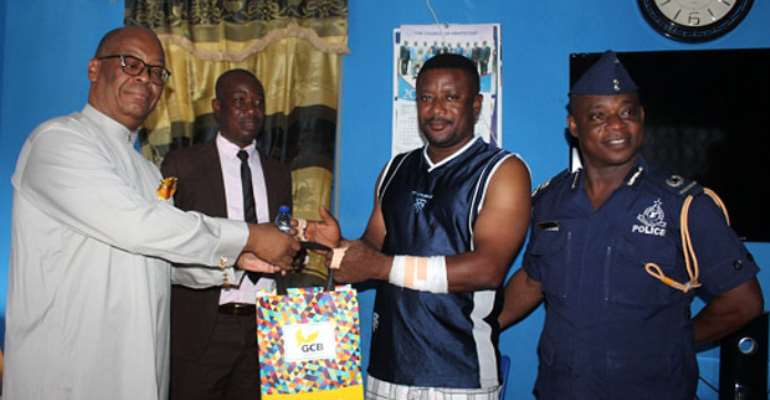 GCB Bank has rewarded personnel of the Kasoa Divisional Command of the Ghana Police Service for demonstrating patriotism and commitment to national interest.

The bank also paid the medical bills of Inspector Charles Yeboah of the Command who was injured in front of the Kasoa main branch of the bank during a scuffle with Kojo Appeaga, 36, who wielded a double-edged machete and threatened customers and staff of the branch on 27th September 2019.

Appeaga, who is now in police custody, had attempted to forcibly open the doors to the banking hall, but was prevented by security personnel on duty.

The security personnel called for reinforcement from the Police Divisional Office which responded quickly and apprehended Appeaga after they had fired some warning shots.

In the melee, Inspector Charles Yeboah was stabbed on the left lower arm whilst attempting to arrest the suspect. He was rushed to Kasoa Polyclinic for treatment and has since been discharged.

The Managing Director (MD) of the bank, Anselm Ray Sowah, who led a delegation of the bank to the Kasoa Divisional Command and the private residence of Inspector Nyarko, presented an undisclosed amount of money to him to cover his medical bills and to cushion him up while recuperating. He commended the police for the timely intervention to prevent a situation which could have resulted in chaos at the branch and the community.

Mr. Sowah was particularly grateful to the Divisional Commander and his men for the professional manner they handled the issue. He said “the fact that you intervened means a lot to GCB Bank. It is important to recognize the police in this circumstance and we cannot ignore you.”

The Divisional Commander, ACP Charles Kofi Adu, expressed the appreciation of the Ghana Police Service to the management of GCB Bank, particularly the MD, for demonstrating care towards the police in a practical manner.

He described as encouraging and motivating for the GCB Bank MD to personally follow up, interact with the police and visit the injured person.