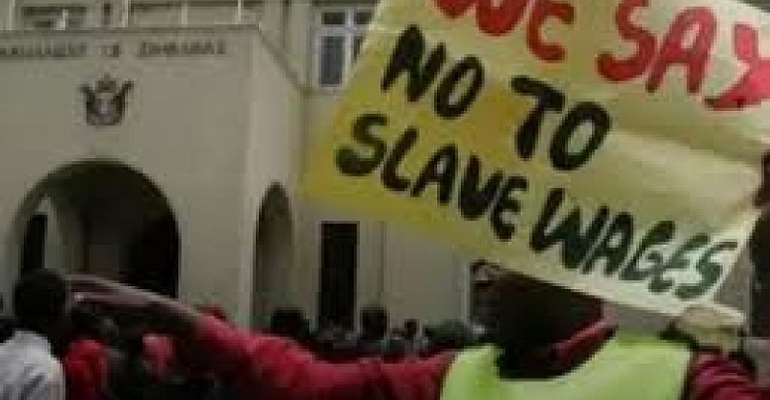 The country's public sector workers union says economic conditions are so bad that its members can no longer afford to go to work.

Government workers in Zimbabwe currently earn about US$70 a month, with salaries eroded by hyperinflation running at 300%, according to the Zimbabwe's statistics agency.

More so, wages have shrunk 15 fold over the past year, while fuel and electricity prices have rocketed by more than 400 percent in 2019.

Stay-at-home indefinite
Prior to launching the strike, the Apex union, with a membership of 300,000 state workers, wrote to the government denouncingwhat they see as its double standards.

“We are amazed that the government allowed the energy regulatory and power supply authorities to benchmark their prices against the interbank rate while refusing to apply the same principle on workers' salaries”, wrote Cecilia Alexander, who heads the umbrella labour organization.

Zimbabwe's rural teachers joined the action against underpayment on Monday, just days after nurses who abandoned hospital wards a fortnight ago.

Doctors have been on strike for a month and a half.

On Monday, they defied a court ruling that ordered them to return to work, arguing that a 60 percent pay rise offered by government was inadequate to meet every day costs.

“The government is deceiving the world with claims that the medics have accepted the offer”, says Zembbabel Mudzingwa, deputy editor of the Harare-based Newsday newspaper.

“In the doctors' mind, they would rather have their salaries benchmarked against the US dollar, after which they may be able to resume their duties”, said the respected journalist who spoke to RFI from Harare.

According to Newsday's deputy editor, “for now it is impossible for them to continue to come to work because it is like subsidizing their employer”.

Zembbabel Mudzingwa also deplores the worsening state of the Zimbabwean economy ravaged by mass unemployment, shortages of foreign currency and basics, such as bread, sugar, beef and medicines in public hospitals.

“More than 80 percent of the working population is out of formal employment”,

“The salaries of the remaining 20 percent had been eroded to such an extent that, for most of the workers, it doesn't make sense anymore to continue reporting for duty”, said Mudzingwa.

“The few that are reporting for duty are just doing it out of passion”, he said.

This industrial action adds more pressure on President Emmerson Mnangagwa who has promised to woo back investors, generate growth and lift Zimbabwe from a cycle of economic hardship.

Few are ready to listen to his narrative that he inherited a “dead economy” from late President Robert Mugabe and needs time to implement reforms.

According the Newsday's Zembbabel Mudzingwa, nothing discredits Mnangagwa's sincerity more than the governments lavish spending.

“They are being told government doesn't have money to pay them. And yet we have the President and cabinet ministers travelling all over the world using tax payers' money. They are saying it is better to cut down on those trips and pay employees”, says the senior official of the Harare-based Newsday publication.