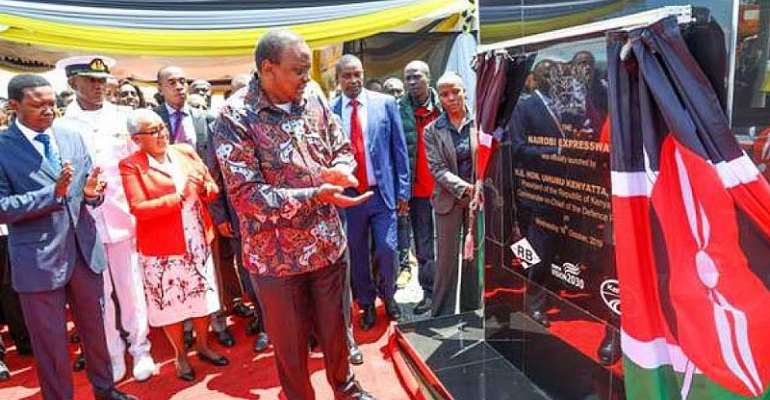 Kenyatta's historic handshake with longtime rival and opposition leader Raila Odinga triggered a vicious power struggle inside the ruling Jubilee coalition amid accusations that the Building Bridges Initiative (BBI) was just a plan to disrupt the succession pact that took him to power.

President Uhuru Kenyatta addressed the controversial relationship while laying the foundation-stone of a 27-km lap of the Nairobi –Mombasa expressway, in Mlolongo, Machakos County on Wednesday.

Bridges for peace
There had been growing speculation in Kenya that the BBI could lead to constitutional reforms to create new positions that could see him and Raila Odinga team up to vie to form the next government.

In the address, Uhuru admitted he was aware that not everyone inside his Jubilee coalition was happy when he joined hands with Raila to form the BBI team on March 9, 2018.

The pact is not about elections, but to ensure that Kenyans can live in peace and unity,” Uhuru said.

As he put it, Kenya is like an elephant, which can't be handled by just one person, which is why he engaged not only Raila Odinga in the handshake , but also reached out to other leaders such as former Vice Presidents Kalonzo Musyoka and Musalia Mudavadi who is now leader of the Amani National Congress.

Ruling Jubilee coalition in strands
His remarks were clearly addressed to the two strands of the Jubilee fraternity and not to the entire Kenyan population, says Barack Muluka, a consultant in strategic and political communications based in Nairobi.

“There is a strand which is agglutinated around the deputy President William Ruto, unhappy about the BBI and the amity Kenyatta has found in the ODM leader Raila Odinga, and the President's backers known as Kieleweke, Muluka explains.

According to the  political commentator, the swipe at so-called leaders Kenyatta accused of “using, force to gain power instead of persuading voters”, was clearly directed at his deputy, who in Muluka's view, "has been playing a different ball game".

“One is not sure about what is going on within the executive”. But he says the President's decision to appoint interior minister Fred Matiang'i as coordinator of cabinet activities means that the deputy William Ruto was unlikely to attend Thursday's cabinet meetings.

BBI plan still mystery
In the interview with RFI Barack Muluka also discussed the much-awaited BBI report which he said remained shrouded in secrecy, except for ODM leader Raila Odinga's expressed interest in a referendum that would restructure the executive to create   space for a prime minister and a number of deputies or to expand the presidency.

Was his line about people using tactics that lack in respect, and the warning that there would be consequences motivated by some incidents that may have taken place with the executive?

Uhuru spoke as it prepared to submit its recommendations to the two leaders. Highly awaited will be their proposal on how to prevent election violence in the country “perhaps by Monday October 21, when Kenya celebrates Heroes' Day.

Expressway at heart of Kenyatta's legacy
The strategic section of the road project launched by the Kenyan President on Wednesday is expected to ease traffic congestion at Nairobi's Jomo Kenyatta International Airport.

He reportedly wants the 500-million euro Nairobi-Mombasa expressway to be one of the legacies of his time in office.

But according to Barack Muluka, there is a riddle around the project originally awarded to an American firm, Bechtel Corporation, but finally handed to China's Road and Bridge Corporation which plans to complete it by December 2021.