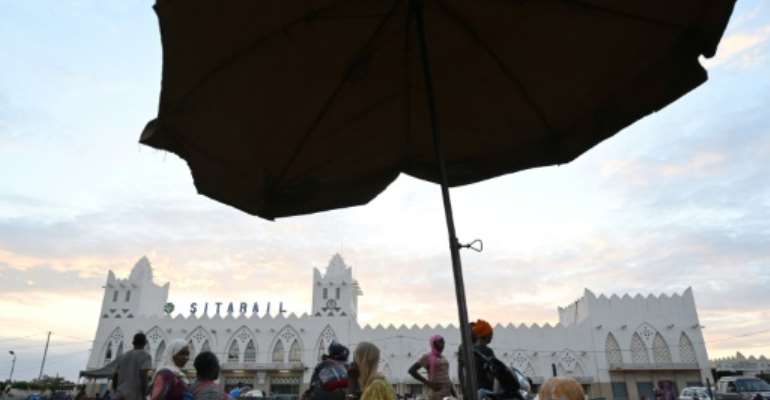 Former tourist hub Bobo-Dioulasso has been spared the violence, but visitor numbers have tumbled. By ISSOUF SANOGO (AFP)

"They've placed us in the red zone, which means the tourists aren't coming like before. Even the aid workers don't come," said Antoine Atiou, governor of Burkina Faso's Hauts-Bassins region.

The "red zone" refers to the risk of jihadist attacks -- a top-end warning by Western embassies to travellers wanting to visit southwest Burkina and the economic capital, Bobo-Dioulasso, once a popular tourist destination.

The impact has been brutal for local businesses. The city's hotels have emptied, its heritage sites are quiet and the souvenir shops shuttered.

"It's hard, hard, hard!... We haven't seen a tourist for a fortnight," said Sanou Moumouni, a guide at the city's mosque and in the historic Kibidwe district for 22 years.

"I'm living on loans," he said. "We no longer have work because of the murderers. We're sick of it."

The city's Grand Mosque is one of its highlights. By ISSOUF SANOGO (AFP)

The north and the east of the landlocked country in West Africa endure frequent Islamist attacks, which have claimed some 600 lives in the past four years. There have also been some raids in the west.

In December 2018, an Italian man and his Canadian companion were kidnapped on the road from Bobo to the capital Ouagadougou. Last April, the Burkinabe government said it had information that the couple was still alive, but might have been taken to another country.

Bobo-Dioulassou itself has been relatively spared as the jihadist threat expands across poor nations of Africa's Sahel region.

Ministry of tourism statistics from 2017 show that of about half a million annual visitors to Burkina Faso, fewer than 150,000 came from abroad -- down 5.6 percent from 2015.

Renowned for its traditional masks, its batik print textiles and the balafon -- a West African instrument like a xylophone -- Bobo attracted thousands of Western tourists.

The Lonely Planet guide, which notes the security situation currently prohibits travel, says the city's "tree-lined streets exude a languid, semitropical atmosphere that makes it a favourite rest stop for travellers", adding that highlights include a "thriving live-music scene and excellent restaurants".

Sales of crafts like these batik print textiles have fallen as tourist numbers shrink. By ISSOUF SANOGO (AFP)

The city itself has an array of charms, with its grand railway station, bustling market and striking Great Mosque -- an undulating white-plastered mud structure studded with wooden poles that dominates the historic centre.

Bobo-Dioulasso is a jumping-off point to visit regional highlights like the ruined fortress of Loropeni, a UNESCO World Heritage Site. It was also a base for exploring the Dogon country in Mali, Ivory Coast and Ghana.

"Everyone came through Bobo. We really were a tourist region. Now it's over," said Benjamin Ouedraogo, owner of the Watinoma hotel and president of the professional association of hotel and restaurant owners in High Basins.

To avoid closing his hotel, Ouedraogo took on a second job in the building trade. "We asked for help, but state aid is a disaster," he said, explaining that the authorities rejected applications for tax rebates and preferential tariffs on water and electricity.

In Kibidwe, an old neighbourhood of the city near the mosque, children play in alleys and women wash clothes in the open air, but most of the shops that catered for tourists are now shut.

Benjamin Ouedraogo said hotels in the region only do a third of the business they did before the attacks. By ISSOUF SANOGO (AFP)

Sanon Bissiri, an artist, was quick to bring out his batik prints on spotting Western journalists.

"I don't hang them every day any more, that's pointless. Since July, I haven't even sold two. All this because of those jihadists. Now I have to do masonry whenever I'm wanted."

Bissiri used to sell his textiles to an Italian association that made regular visits.

"That's over. We just get by. It's my wife who meets our needs," he said. "I come in to work each day on foot, six kilometres (nearly four miles). I can't afford medicine for my son with his cough."

The city's market is a local hub but officials say economic activity has fallen. By ISSOUF SANOGO (AFP)

Bobo's nightlife is not what it was, though the locally-brewed beer is the same.

Governor Atiou said people were reluctant to go out.

"All that weighs on economic activity. Unfortunately, this is the aim of the terrorists."

PHOTOS: Ghanaians hit the streets of Accra for #FixTheCountr...
50 minutes ago