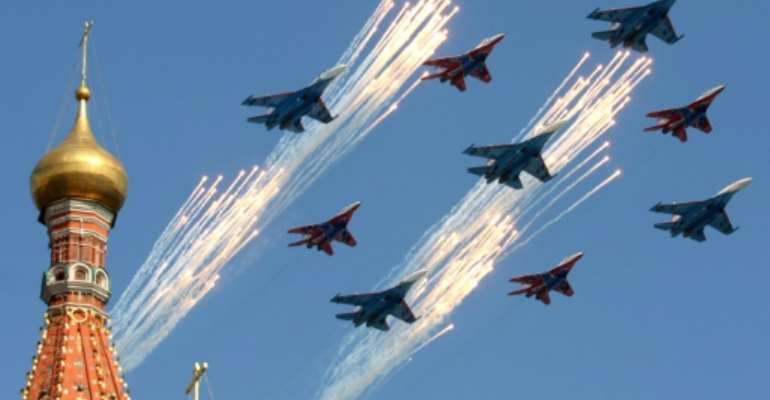 Russian arms manufacturers, along with diamond, grain and oil companies are becoming increasingly active in Africa as the continents' economies grow. By ANDREY SMIRNOV (AFP)

From diamonds and arms to nuclear power and oil, Russia has major business ambitions in Africa, even if it is coming late to the party.

Western countries like France and the United States are deeply entrenched in African economies and in recent years China has emerged as the continent's biggest new business player.

But with President Vladimir Putin hosting dozens of African leaders next Wednesday and Thursday, experts say Moscow is aiming to expand its reach in Africa's growing economies.

The timing of the Russia-Africa Summit -- the first major gathering of African leaders in Russia since the collapse of the Soviet Union in 1991 -- is hardly a coincidence.

"What the Russian authorities didn't want was to let this train go by without them, it would have been unacceptable," French geopolitical analyst Arnaud Kalika said.

Russia's business footprint in Africa is relatively small, about the same size as that of Turkey, another country that has been looking to expand its influence on the continent.

Overall Russian trade with Africa stood at about $20 billion in 2018, less than half the continent's trade with France and 10 times less than with China.

The numbers have been growing however. Russian exports to Africa doubled in the last three years and have risen from one percent of total exports five years ago to four percent now.

Grains account for a significant amount of exports, as do weapons, with Africa representing 15 percent of total arms sales for the world's second-largest exporter.

Russian firms are also involved in oil operations in Ghana and Nigeria, diamonds in Angola and nickel elsewhere.

Russian grain exports to Africa represent a significant amount of overall trade and are especially important for Egypt. By YURI KADOBNOV (AFP)

"Chinese skills in arms and oil and gas are not as good as Russian skills," he said.

North Africa dominates, accounting for about 80 percent of Russia's trade with the continent.

Putin took modern Russia's first major steps in Africa in 2006, when he announced a deal in Algiers to write off Algeria's Soviet-era debt in exchange for a huge arms contract.

Putin did it again in 2008 in Libya, exchanging debt for rail contracts and oil prospects, but the country's descent into war in 2011 left the projects stalled.

Russia's experience in neighbouring Egypt has been much more positive, with Putin and President Abdel Fattah al-Sisi restoring a Soviet-era strategic partnership after Sisi came to power in 2013.

Cairo and Moscow have agreed a slew of deals for Russia to sell arms and build nuclear power plants, and Egypt -- the world's biggest grain importer -- is now mainly fed by Russian supplies.

Arms deals have been especially useful as Russia expands its interests into sub-Saharan Africa, with agreements reached over the last few years that included the Central African Republic, Nigeria and Equatorial Guinea.

Russia has signed arms agreements in the last few years with the Central African Republic, Nigeria and Equatorial Guinea. By ANDREW MIREYKO (AFP)

The deals, Kalika said, offer a form of "security in exchange for economic advantages" and are especially welcome in countries where there is a "weariness" with China's role as a lender and investor.

But so far, experts say, Moscow appears to lack an overall strategy for doing business across Africa.

Russian business instead seem to be seizing opportunities ad hoc, in contrast to the Turkish approach.

Ankara has launched a major charm offensive in Africa, sending diplomatic and business delegations throughout the continent.

Egypt is one of a few African countries that can be reached directly from Moscow. By MOHAMED EL-SHAHED (AFP)

There are direct flights from Turkey to more than 50 African destinations.

By contrast, from Moscow it is possible to fly direct only to a handful of countries such as Egypt and Ethiopia.

But Robertson said it is not too late for Russia to take a bite out of the "growing pie" that African economies represent.

"Is there still a market? Yes, there is, because Africa's going to keep on growing and will be the fastest-growing part of the world by 2030," he forecast.