We Are Setting The Pace For Industry Players – PZ Cussons 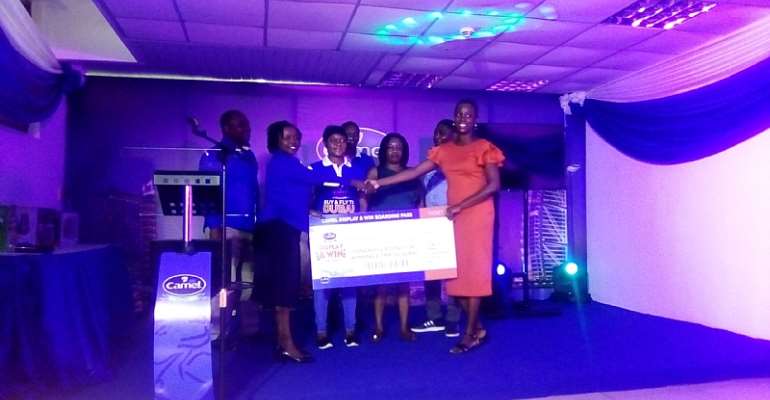 The Channel Marketing Manager for PZ Cussons Ghana Limited, Maxwell Quartey has indicated that the PZ Cussons Camel Display and Win Retailer Promotion initiative has set the pace for industry players to learn and revises their loyalty promotion schemes.

He made this known during the grand finale of the Camel Display and Win Promo, held on October 17, 2019 at the SIC Life Mall in Accra.

“We are sure that some industry players may even learn from what we’ve started now,” he said.

He added that as a means of developing their brand, they have the responsibility of making their Camel products always available, visible and accessible to shoppers.

"To run such a loyalty scheme in terms of retailers buying our products and displaying over a period of time, it helps to win a very good share of the retailers table,” Mr Quartey stated.

He continued, “Once we have a good share and shoppers can pick from, they also get rewarded. So it’s sort of a win win for us and the retailers.”

According to him, the general focus of the promo since its inception has been encouraging and it’s their hope to make it even bigger and better going forward.

“The retailers will tell you that ever since they started the displaying of the required quantity and being visible with the display stands and their shelves, they’ve seen increase in their sales,” he emphasised.

Hafsa Arthur, Head of Marketing of PZ Cussons Ghana Ltd. stressed that, “…all of our products kill 99.9 percent of germs either on the skin or on surface as well as being kind to skin. We have the right formulation to equally be kind and mild on the human skin.”

She said the loyalty promo initiative is a way of showing appreciation to their customers for sticking with the Camel brand.

The two winners of the Ultimate prize for the promo were announced. They are ‘Kedib’ and ‘Nifsarp’ Enterprises respectively who will be embarking on an all-expense-paid holiday trip to Dubai come January next year.

Elinam Nyatefe of ‘Kedib’ Enterprise expressed her excitement saying, “…it was an 8 week promotion whereby retailers were supposed to buy Camel and display on their shelves and also win some airtime every week. So I took part in the promotion and by the grace of God I was shortlisted to be part of the 10 retailers to which I won a trip to Dubai through the draw. I am so happy because I didn’t really expect it. I was just called to come and I won. And I give glory to God.”

Linda Samani of ‘Nifsarf’ Enterprise couldn’t hide her joy as she said, “I am so overwhelmed. I am really happy. I didn’t even expect to win this. It came unexpectedly. I thank Camel so much for giving me this opportunity to be able to travel to Dubai which is one of the countries I’ve dreamt of travelling to.”

FixingTheCountry Movement to march in support of Akufo-Addo'...
33 minutes ago