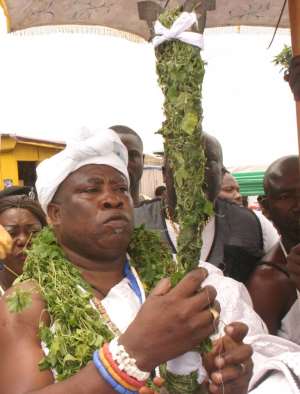 Pursuant to the provisions of Section 57 of the Chieftaincy Act 2008 [Act 759], the National House of Chiefs has registered GBƐTSƆƆLƆ Nii Ashitey Akomfra III as the Paramount Chief of Teshie which took effect on 27th September, 2019, vide Serial No. 933 in the record of the National Register of Chiefs.

GBƐTSƆƆLƆ Nii Ashitey Akomfra III was installed as the 18th Teshie Mantse in line with Teshie customary law and usage on the 18th of December, 2014.

Nii Akomfra III has gone through all the mandatory customary and statutory installation processes as the Paramount Chief of Teshie.

In a statement issued by the Teshie Mantse Palace, Nii Akomfra III appealed to all Teshimei to bury their differences and join him to tackle the common problems of poverty, poor sanitation, education challenges and underdevelopment facing the Teshie community.

GBƐTSƆƆLƆ Nii Ashitey Akomfra III, assured Teshimei that he is ready to dialogue with all stakeholders in the Teshie Chieftaincy divide in order to secure a win-win outcome for all interested parties.

He pledged to take pragmatic steps to regularise the statuses of all existing Traditional Office Holders in Teshie so that every de facto office holder is guaranteed a befitting chieftaincy role under the new Teshie Chieftaincy Paradigm.