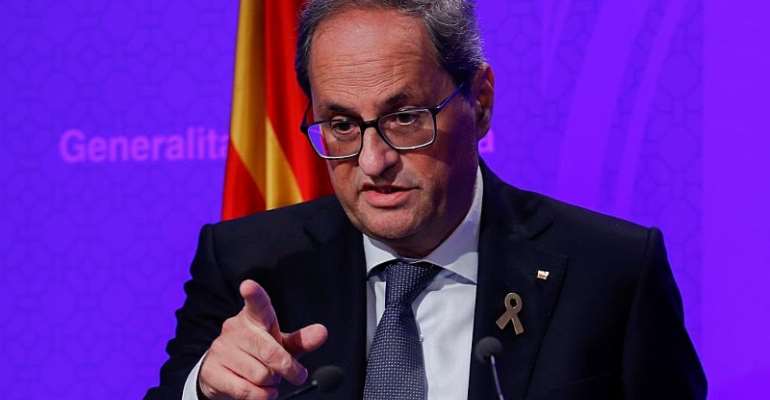 The president of the Catalonia region in Spain on Thursday vowed to work towards a new vote on secession despite days of street protests following jail sentences of up to 13 years handed out to nine politicians who led a failed independence bid in October 2017.

Quim Torra told the Catalan parliament he would lobby for the area's right to govern itself.

His pledge came hours after he condemned three days of demonstrations and skirmishes in the region in which nearly 200 police officers and hundreds of demonstators have been injured.

Protesters unleashed a wave of disruption after the supreme court handed out prison terms to the instigators of 2017 independence movement.

Penalty
The harshest sentence of 13 years was given to the former Catalan vice-president Oriol Junqueras who served as the main defendant in absence of Carles Puigdemont, the region's leader who fled Spain to avoid prosecution.

"If they condemn us to 100 years of prison for putting out the ballot boxes for a vote on self-determination, then the answer is clear: we must do the same again," said Torra.

"We all know the difficulties we face through repression and fear. But we must push forward and not allow ourselves to be intimidated by threats and bans," he added.

In his address, Torra repeated his call for an end to the violence on the streets. Blaming provocateurs and agitators, he added: "They should be isolated and kept away from the protests."

I’m confident NPP’s next flagbearer will win 2024 elections ...
10 minutes ago

Akufo-Addo is serving in Ghana’s interest ‘irrespective of u...
10 minutes ago