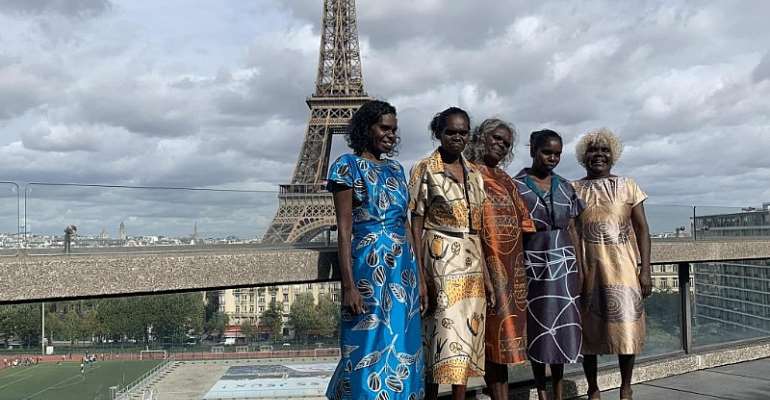 Five Aboriginal artists from the Bábbarra Women's Centre in Maningrida in the north of Australia came to Paris, for the first time, to preside over the official opening of an exhibition featuring their traditional textile art at the Australian Embassy in Paris, on until 10 January 2020.

The name given to the exhibition is Jarracharra, a word in the Burarra language, which means dry season wind.

Just as it heralds seasonal growth, change and abundance during the winter months of Australia's far north, it is the wind which brings messages and visitors.

It marks the season of travels, exchanges, meetings and ceremonies, all so essential to the indigenous communities of Australia.

This group of talented and determined women of different ages travelled from their home in western Arnhem Land on the Arafura Sea, an eight hour drive across rough roads, crossing 31 rivers to get to the state capital Darwin before flying out to Europe. Some of the women have never left this part of the country before.

The Bábbarra Women's Centre employs only women, and through their screen printing, bark painting and weaving, they are keeping their culture and languages alive, and they are keen to share it with the world.

“Thank you for listening to the story of our country,” Janet Marawarr said emphatically in the Kuninjku language, standing barefoot on the stone floors of the Australian Embassy in Paris, proudly giving a description of the traditional dances to follow, to officially open the exhibition.

The women, dressed in black, their faces etched in white ceremonial paint formed a circle and performed five short dances to recorded music of men chanting and playing clapping sticks.

Around them, large banners of delicately screen printed fabric fluttered gently, suspended from the high ceiling like sails, allowing visitors to walk in and around them, and get up close.

The art of 17 women was chosen for this exhibition, an impressive example of their collective knowledge of 'dreaming', or traditional stories.

The colourful silk panels feature designs and motifs, passed down through the generations, related to bush food, animals, tools and the landscape, representing thousands of years of cultural practice.

Despite the remote nature of their homeland, many of the women's art is already shown in galleries in Australia and overseas.

As part of their trip to Paris, to share their techniques, they held a workshop with students from fine arts and crafts school Ecole Boulle, and met with other designers and artisans.

Last week the group made a visit to the Musée du Quai Branly- Jacques Chirac, an internationally-renowned museum with an extensive collection of Indigenous art from around the world, including works from Maningrida.

In fact, Jennifer Wurrkidj's father was John Marwundjul, who painted the ceiling of the museum in Paris back when it opened in 2006.

Among the 25 or so contributing artists at the Bábbarra Women's Centre, 12 languages are spoken. Maningrida community represents the one of the places with the highest concentration of native languages in the world.

Unique heritage like this is being promoted this year by the United Nations which has made 2019 its year of indigenous languages.

Language is the cornerstone at Bábbarra, which is an embodiment of a successful concerted community effort to preserve tradition while promoting economic autonomy.

From sumptuous multi-layered textiles, sold online to individuals as well as fashion houses and artisans; to weaving with local pandanas palms; to painting on bark, or just having a yarn, Bábbarra is a vibrant hive of industry and ultimately the backbone of this remote community.

Founded 35 years ago by Njebbana leader Helen Williams, it began as a women's refuge, then became an arts centre, which also houses an opportunity shop, a store and a laundromat, all run by women.

The name Bábbarra comes from a Kunibidji women's site, a fertile freshwater billabong south of the community.

Bábbarra is owned by Bawinanga Aboriginal Corporation, an organisation which supports and advocates for people who live on their traditional homelands.

Interviewed by RFI, centre director Ingrid Johanson eloquently summed up the exceptional nature of this voyage.

“In Australia, there's very basic knowledge around indigenous histories, indigenous language, culture, complexities and all the things we should be celebrating."

"There's a real lack of knowledge and I think these ladies' work really starts to address that in a big way."

Jarracharra is the wind of communication and through these artworks, at once ancient and modern, the women present their corner of the world with deft strokes and colour that leave a mark on the visitor well after one has gone home.