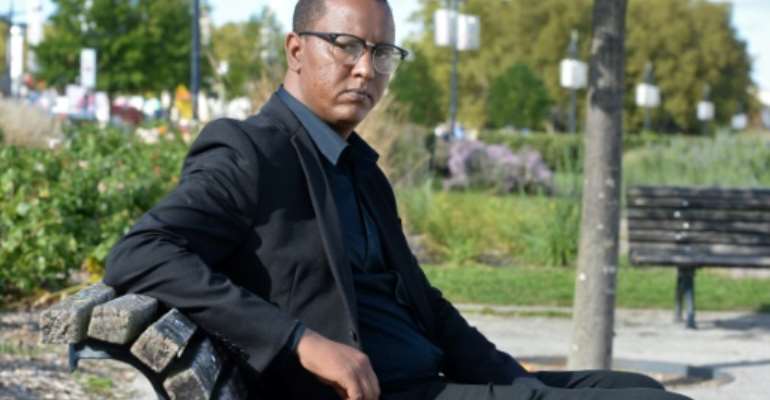 The 36-year-old says his prison diary helped him survive an inhuman incarceration. By MEHDI FEDOUACH (AFP/File)

A Mauritanian blogger who spent nearly six years in jail on blasphemy charges where he only "saw the sun six times" told AFP that the Islamic republic's ruling elite was misusing religion to retain its grip on power.

Aged only 36, Cheikh Ould Mohamed Ould Mkheitir walks with an old man's limp -- the result of a punishing stint in prison that ended with his release in July, the culmination of a sustained international campaign.

But his spirit seemed unvanquished as he spoke to AFP near the southwestern French city of Bordeaux, where he has started a new life.

He said he spent the first seven months in prison "in a cell two metres (6.5 feet) long and less than two metres wide with no furniture, toilets or a shower stall."

"I could stand but not walk," the tall, dark sharp-featured Mkheitir recalled.

Mkheitir's case was taken up by rights watchdogs after he was sentenced to death on December 24, 2014 for allegedly insulting the Prophet Muhammad in a blog post while discussing slavery in Mauritania -- a deeply sensitive subject.

He then repented, and an appeal court on November 2017 downgraded the sentence to a two-year jail term.

That ruling spurred angry protests in the deeply conservative West African state, and mobs demanded he be put to death.

Even though he had already served his jail time while in custody, Mkheiter was then kept behind bars, for "his own safety", according to authorities.

Mkheitir had been accused of challenging decisions taken by the Prophet Muhammad and his companions during holy wars in the seventh century.

He had also attacked the mistreatment of the country's black population, blasting "an iniquitous social order" with an underclass that was "marginalised and discriminated against from birth", and to which he belongs.

Modern-day slavery in Mauritania, under a hereditary system of servitude, forces members of the "slave" caste to work for little or no pay as cattle herders and domestic servants, despite an official ban.

"The state made it out to be a religious case but it was a question of caste, of racism in Mauritania," he said.

"Many Mauritanians have spoken of religion using worse terms but they were neither arrested nor thrown in prison because they were upper class. The state wants a racist country," where the Beidanes rule supreme, he said, referring to the dominant Arab-Berber class.

"This caste governs the state in the name of religion and it will not give it up easily."

The solution, he said, was a "secular state", which he conceded was "very difficult" but "not impossible", saying "determined youths" could usher in a "social revolution."

Mkheitir's parents, fearing for their lives, had sold their possessions in Mauritania in late 2016 and left for France via Senegal.

Mkheitir's wife was forced into a divorce and then married off to someone else under pressure.

An accountant by training, Mkheitir still hopes to return home but has chosen France, "the country of freedom," to live for the present.

He learnt French while in prison, scribbling imaginary conversations in French "between myself and another soul" in a notebook which became a "friend, a companion with whom I could share everything."

It will serve as the basis for a book on his story. The title? "A temporary death".