Lyon: France's gastronomy capital is dishy in more ways than one 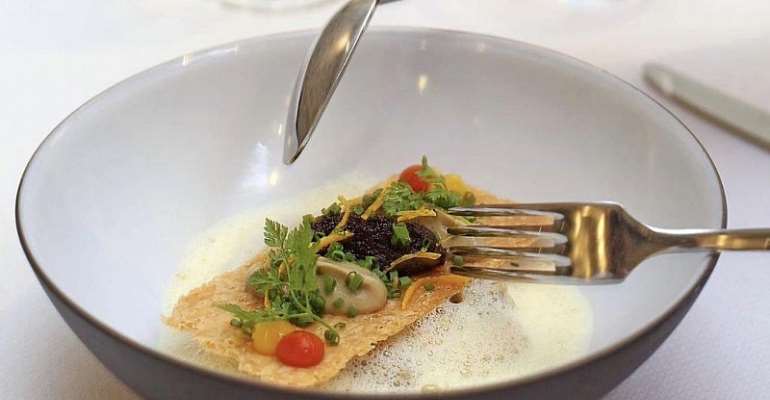 Say French cuisine, and you may think of state-of-the-art dishes prepared by eccentric chefs in luxurious kitchens. But modern French gastronomy is actually a 20th-century phenomenon and Lyons is said to be the capital of French gastronomy. To find out why, RFI visits the city's main food market and meets a Michelin-starred chef

It is said that legendary chef Paul Bocuse inspired by elements of traditional bourgeois family meals in Lyons (locally known as Lyons mothers' cooking), re-invented France's culinary tradition in the second half of the 20th century.

He was also responsible for bringing the chef into the forefront of the culinary process. He made cooks come out of the kitchen to meet clients. He travelled and made French gastronomy renowned internationally. Food became cuisine, and cooks became chefs.

And voilà. French gastronomy, as we know it, was born.

Today the main food market of Lyons is named after Paul Bocuse, the father of French cuisine. The Golden Bocuse, an award named after the legendary chef is considered the International Olympics for chefs.

Another phenomenon that has made modern French gastronomy known the world over is the Michelin Guide.

Published by tyre-company Michelin since 1900, the guide uses a three-star system to rate high-end restaurants all over the world.

It is 10:30 am in his impeccably furnished restaurant. In the kitchen, a team of chefs prepare an elaborate Saturday lunch menu. In the dining room, the hospitality team sets the tables.

Mariller, keeping a benevolent eye on his culinary kingdom, tells RFI his story.

"I grew up in a family of farmers," recalls Mariller

"I gathered carrots and ate them raw when I was six. We also had cattle, we made our own cream and butter."

A dreamy look comes to his eyes.
"Ah the smell of our fresh farm-roasted chicken on Sundays stays with you for life!"

Bernard Mariller started working as a cook when he was 18. He worked in Michelin-starred kitchens for 12 years, and then opened his own restaurant.

Eighteen years ago, he was awarded a Michelin star.

"I've always dreamed of one", Marillers says with a proud twinkle in his eye.

"Having worked in Michelin restaurants for 12 years, I got addicted to their world. I couldn't imagine having a place of my own without being in their guide."

The stairway to the Michelin stars
"The first star is about the food on the plate, the products used, the sauces. The different elements must blend well.." Marillers tells RFI

Bernard Mariller raises his eyebrows.
"You can't serve poultry with caviar for example."
The third star, Marillers says, is about ultimate perfection in dining. The table set flawlessly. Even the waiters' shoes must be perfect. Every single detail counts!"

The second star, he says, is a compromise between the first and the third stars.

Of course, these criteria are Mariller's own deductions. The modus operandi of Michelin inspectors is a fiercely-guarded secret, creating constant pressure in Michelin-starred restaurants.

"I just have one Michelin star, and I'm happy with that," Marillers says. "I have to work hard to keep the star every year. Michelin inspectors can come in anytime."

"You have to show the Michelin people that you follow their philosophy, that you use the finest products, that you are meticulous."

"It's stressful," he admits.
What about master-chef Marc Veyrat, who is suing Michelin for downgrading his three-star restaurant to two stars without justifying their decision?

Marillers cautiously sides with Michelin on the affair.

"I don't know Veyrat. But I do not have a very positive opinion about him - I've heard things - the way he talks to his staff, the way he treats people...I'm sure he must be doing very fine cuisine but his attitude is is not in the 'Michelin' spirit."

The new generation
However, not all chefs want to go the Michelin way. RFI spoke to Brieuc, a young chef working in Mariller's kitchen, who dreams of having his restaurant one day

"I don't want to go the high-end Michelin way." Brice says. "Too stressful."

Brice smiles.
"My dream is to have a restaurant with a very small menu, just a few local products and simple, affordable meals."

Clément has been making pastries for his father's restaurant for more than four years.

"Cuisine is a question of instinct. If there is salt or pepper or something missing, you can re-adjust it," Clément says.

"But pastry-making is a precise art, either you get it right or you don't.

He brings out a sample of his lunchtime pastry.
"This is an all-chocolate dessert" he explains.
Cracking open the outer cacao crust, one tastes a delicate chocolate mousse. More like foam, really - chocolate light as air.

Then there is a tender chocolate cream and a crunchier almond chocolate on the side.

"It's all about experimenting with the textures and and the creaminess." Clément explains.

It is now midday. All is ready and Bernard Mariller's team waits for the completely-booked restaurant to fill up.