Can We Continue To Trust Our Security Systems? 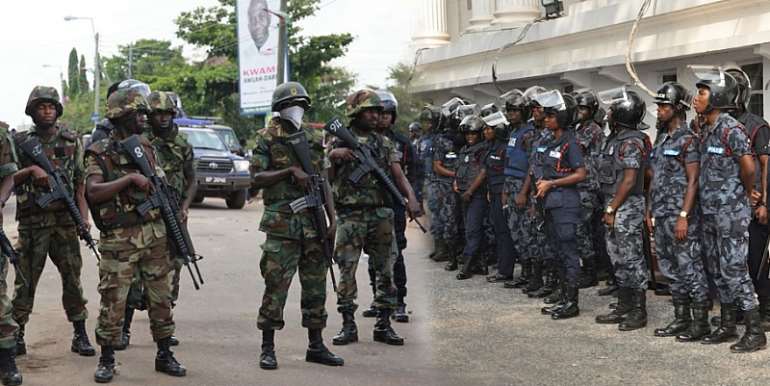 Our dear Africa, a continent so full of potentials with regards to its natural resources, very promising in terms of its development, always gives us a lot to talk about. In all these good attributes, negativity always seem to meander its way through the very good facts about Africa we try to focus on.

Writing a story about Africa is mostly about negative things. We the inhabitants have given the impression to writers to focus on the dark side despite the brightness Africa tries to portray and could be known for. Our Leaders in the way they lead us, through their policies about our economies, security systems etc. have created a pathway. A pathway for the Followers to follow, a pathway that has rendered us susceptible to the negativity we are being subjected to.

All these have instilled some level of negativity in us, created a wrong impression to the outside world, which, all put together have tried to kill our continent. We will always be named and shamed by some of the Developed countries who choose to do so. Not that they hate us, no, but they kind of point us to who we really are and how far we are lagging behind the elite. This write up is no exception as it is related to Africa’s demise, unsurprisingly is a story constantly and continuously being told. The focus will be on security systems in Africa to an extent, and particularly about Ghana and how our security systems have fallen into the ditch.

The security of a country is one of the most, if not actually the most valued thing every country can boast of. It holds the key to the success of a nation. Giving less priority to the security in a country is akin to selling your peace, where we know peace holds everything together in a country. Nothing positive moves or develops in a country without peace. Sadly, the security in most African countries is nothing to write home about compared to the top-ranked countries in Europe and other continents and as such, it is unsurprising to find some of our countries listed as part of the least peaceful countries in the world.

The United State of America spends more than 50 billion dollars every year just to strengthen its security and defense system and the same can be said for Russia and other first world countries. In Africa the story is different. In that, as much as we do not have the wealth to spend on security systems as the elite countries do, we seem to underrate the essence of spending well on security. We seem not to care so much about how secured our country is and countries such as Ivory Coast, Burkina Faso, Nigeria and Cameroon are facing a lot of security issues and breaches where armed militants attack people in their homes and churches, kidnapping, smuggling and a few to mention.

Ghana is little to no different from the above-mentioned countries. It is easier to doubt as much as difficult to believe that we are ranked as the fourth most peaceful country in Africa, considering some of the recent happenings with regards to security in the country. The Security Institutions such as the Military, Police, Immigration, CEPS and the Prison Service have some loopholes in the way they operate.

Ghanaians now do not trust the security authorities especially the Ghana Police Service because of the recent happenings going on in the country. There have been situations where some citizens have threatened, attacked and even killed security personnel in the service and no actions have been taken against them. Also kidnapping acts have been recorded in some regions of the country for close or equal to a year now and the development of they being ransomed has not gone down well with Ghanaians.

There has also been torture and assassination of an investigative journalist and other killings of citizens in diverse ways. All these and many more of such cases have brought fear and panic to most citizens in the country, and the reactions of the security Institutions to these situations have done little to inspire confidence in the Ghanaian Public. Every year, Ghana spends millions of dollars on defense budget; spend a lot in recruiting people into the security services. Sadly, most of these recruitments have just been based on political affiliation, who knows you etc. rather than qualification. This has led to the enlistment and actual recruitment of unqualified people into our security institutions. All these negative incidents have placed in citizens fear and panic causing people not to trust the security authorities in Ghana.

The recent kidnapping of foreign nationals and nationals in the country has been devastating. Citizens are not able to go about their activities in the evening because they fear being kidnapped or worse, to the extent that the Canadian government issued a security warning to all their citizens as to the threat and danger some Ghanaian citizens possess due to our weak security. All these have the potential to drive away prospective investors who would have impacted our economy in a positive way. This has brought a bad name to Ghana. Most citizens now trust the media more than the Police Service and will prefer to report incidents they are going through to media than the police service because some claim even if you report the problem, they will then ask for something in return before they go on to pursue the problem for you or they don’t take action at all because they feel it has become a normal thing now. Some people also claim the police emergency line is always on a busy mode which makes it difficult to even reach them. It is alleged that some Police Officers on the field who are supposed to check the licensing and registration of vehicles just go to the field to take bribes and allows vehicles to speed, over load and cars which don’t even have road worthy to ply our roads.

In addition, there has been tribal wars in the Northern part of Ghana where citizens are using machine guns to kill their fellow human beings but come to think of it we have Security Officers at all our border points so how come all these guns were able to enter the country without the security officers knowing about it? Rosewood has been banned for a couple of years now but we keep seeing cargo full of Rosewood plying our roads every day. Illegal migrants are trooping into our country everyday but when you visit our border points you will find security officers there so the question is what work are our security doing to improve the security lapses in the country. This is a country that spends millions of cedis, convertibly, every year but our security systems keep deteriorating. People cannot go about their day to day activities business activities after 9pm because of how insecure our streets have become, which is affecting economic growth in a way.

This isn’t the Ghana we are all living to dream in so I want to call on our security agencies to be up to the task and work to protect the country and its citizens. Just as our national anthem says” BOLD TO DEFEND FOREVER, THE CAUSE OF FREEDOM AND OF RIGHT.” I urge every Tom, Dick and Harry in the service to work hard to achieve this dream of making the country the safest of havens for business and other elements that contribute to our nation’s development to thrive. Citizens cannot live in fear and panic and will want to work to improve the development of the country. I will also recommend that our Security enlistment shouldn’t be politicized but rather should be based on who qualifies to be recruited into the service. In all I hope and believe they can do better than what they are doing if they change their ways and will urge all officers to put in their maximum best.