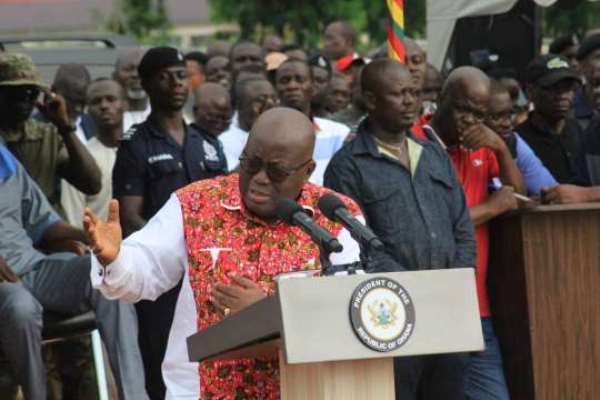 The Eastern Regional Secretariat of the ruling New Patriotic Party (NPP) have commended President Akufo-Addo for his tour in the region as part of his nationwide tour.

President Akufo-Addo last weekend started a three-day tour to six districts within the Eastern region. They include Nkawkaw, Atiwa East and West, Fanteakwa North, Denkyembour and New Juaben south, to interact with the people.

The President Nana Addo Dankwa Akufo ended his 3-Day Working Visit to the Eastern Region on Monday 14th October, 2019 with a grand durbar organized in his honour by the Students and Teachers of the Senior High Schools in the New Juaben South Municipality at Koforidua Secondary Technical School where he enumerated a number of completed and on-going projects by his government which includes roads, hospitals, schools, etc in the Eastern Region. The President as part of his speech admonished the Students to take their academic work seriously to justify the huge investment his government is making in his FREE SHS Policy being implemented.

The 3-Day Official Tour of the Eastern Region by His Excellency Nana Addo Dankwa Akufo-Addo began at Nkawkaw where he inspected massive road construction from Akwasiho through Twenedurase to Obo Kwahu. He stated and emphasized that the road project when completed, will facilitate easy access and smooth travelling from the Northern and Ashanti Regions to the Kwahu Ridge and the Afram Plains. He inspected 10km Nkawkaw Township Roads and held a durbar of the Students and Teachers at Nkawkaw Senior High School where he announced the construction of Dormitories, Classroom and the donation of a bus for the school.

The President Nana Addo Dankwa Akufo-Addo, appealed for the total support of the good people of Ghana, to achieve the vision of his Government.

The President’s next place of visit was at Atiwa East where his Government is constructing the first-ever model Technical and Vocational Education and Training Centre (TVET) at Anyinam to provide vocational and employable skills for the youth of the Region.

The President of the Republic, Nana Addo Dankwa Akufo-Addo and his entourage, then moved to Atiwa West to inspect the on-going road construction of 41.4km Kwabeng-Abomosu-Asuom road which will bring relieve to the communities in the area and to facilitate cutting off farm produce. The first day of the President's visit ended at Begoro in the Fanteakwa North constituency where a grand durbar was organised by the Chiefs and people of Begoro to thank the President for the construction of the 24.8km road from Osiem - Begoro and among other projects.

The second day of the tour, saw H. E. Nana Addo Dankwa Akufo-Addo, the President of the Republic of Ghana worshipping with the St George’s Catholic Church to give thanks and praises to God almighty for seeing him through and the nation up to this far and also interacted with the Catholic Bishops. After the church service, the president visited the Great Consolidated Diamond Company at Dekyembour District which is to be revamped to boost the local economy and create jobs for people in the area and the entire Eastern Region.

In addition, the President visited the Oil Palm Research Institute at Kusi, the first time a sitting President has visited the institution to see things for himself which the chief of the area commended him for such an initiative. The president continued his tour where he attended an impressive durbar organised in his honour by the Chiefs and people of Akim Wenchi in a colourful and grand style.

The 3rd Day of the tour saw the President, Nana Addo Dankwa Akufo-Addo inspecting construction of Multi-purpose Sports Complex which will have football pitch, tartan tracks, boxing gym, takwaendo gym, tennis courts, volleyball-court, and all other sporting activities at the Koforidua Youth Training Centre and finally graced the students and tutors durbar at Koforidua SECTECH.

We would also, like to express our heartfelt appreciation to all the Chiefs and people of the Eastern Region especially the traditional areas the President visited. Nananom y3da mo ase!

We want to acknowledge and recognize the professionalism exhibited by the Security Agencies and Media throughout the tour. Indeed, we were overwhelmed by their commitment to duty. We say thank you.

The biggest thanks goes to State Agency Officials, NPP National, Regional, Constituency, Electoral Area, Polling Station Executives, Party Members and the entire people of Eastern Region, we say "Ayeekoo" and thank you for the warm reception accorded to His Excellency Nana Addo Dankwa Akufo-Addo, the President of the Republic of Ghana.

The Eastern Regional Executives of the New Patriotic Party are grateful to Mr President and the People of Eastern Region for making the visit a success.