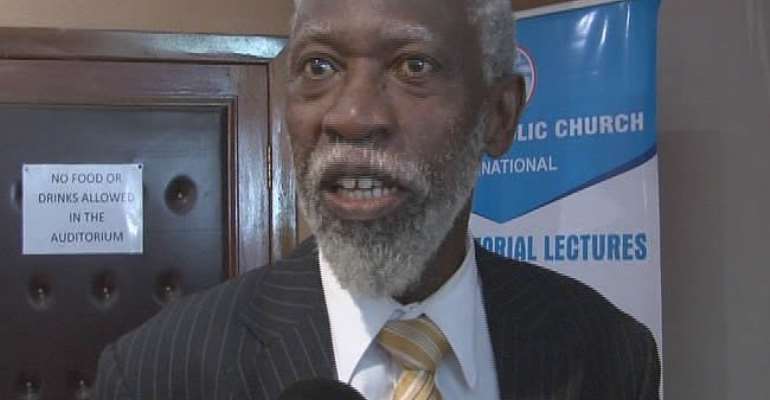 Professor Emeritus Stephen Adei, Board Chairman of the Ghana Revenue Authority (GRA), has directed customs officials to re-direct all purported protocol clearance of goods to his office as part of measures to block revenue leakages.

Prof. Adei says any officer who goes contrary to the directive will have himself to blame.

He gave the directive when he, together with the Director-General of the GRA and the Commissioner of Customs visited the Custom Division, Tema Collection at the Port of Tema to interact with staff of the GRA.

The visit was the first interaction he had had with Custom officials after taking the chairmanship role a fortnight ago.

He warned that “if anyone of you clears a chicken in the name of a fish, for somebody, he may be the biggest person, but I will hold you responsible”.

He added that as part of his crusade on “stop the leakage by the few, ” he would provide a dedicated phone number were complaints of leakages could be reported to as a way to empower junior staff to report without fear of victimization and transfer adding that not less than a quarter of what would be retrieved would be used as reward for those who report.

The GRA Board Chairman observed that some senior and middle officers engaged in connections to enrich themselves while the others especially the juniors suffer from their action as their acts prevent the increase in revenue which is directly linked to salary increment and other benefits.

He urged the officers to work hard towards meeting the GRA’s 2019 annual target of 45 billion cedis saying his outfit would not approve any promotions till January due to the many complaints received from officers on unfair treatment indicating that only those productive persons would earn the needed promotion.

Touching on the clearance process, he called for the creation of an office for persons who would want to clear their goods directly instead of through freight forwarders saying there was no reason why people could not clear their goods themselves if they process all the relevant documents, quickly adding however that it does not mean he was against the work of clearing agents.

According to him, Ghana’s over 1,000 freight forwarders and agents was five times higher than that of Nigeria adding that they had been a source of trouble in under-declaring and manipulating in the clearing process.

Colonel Kwadwo Damoah (Rtd), Commissioner, Customs Division, assured that more staff would be assigned to the various collections to help the GRA to meet its target saying, at the end of August, revenue collected was 30 billion cedis out of the 45 billion targeted for the year.

The Commissioner, therefore, charged the officers to put in measures and work hard towards collecting at least five billion cedis each for the months of October, November and December to enable it to reach its target.

Mr Joseph Adu-Kyei, Tema Sector Commander, in a welcoming address, said his area which collected 69.17 per cent of the total Custom target for 2019 had huge challenges.

Mr Adu-Kyei disclosed that “with the operationalization of the MPS terminal 3, several ICDs have been collapsed leaving the following examination sheds; Safebond, Golden Jubilee Terminal, CFS and Car Park, TBT and other CFS”.

He added that the reduction in the home consumption CIF by 10.41 per cent attributable to the 50 per cent and 30 per cent reduction in benchmark values for goods and vehicles respectively and proportionate growth in exemption rate by 22.82 per cent in 2019 posed a great challenge to his outfit.