Should I Stay In Ghana Or Die Trying? 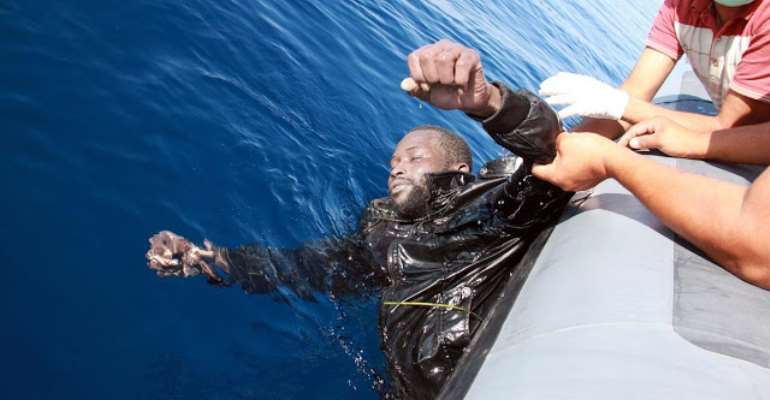 Coast guards pull a drowning man from the Mediterranean

There used to be a joke that one can find a Ghanaian in every part of the world, including Greenland, where the Eskimos are. This sounds true, more than a joke because among Africans in search of greener pastures in Europe or outside the continent, Ghanaians are more than other nationals.

As a result of the current economic hardship in Ghana, it is very likely that more Ghanaians will leave the country towards the Mediterranean, to escape hardships in the country, in spite of a large number of Africans who have already perished in the Mediterranean sea.

Despite the efforts of the current president, Nana Akufo Addo, to revamp the country’s economy and reduce poverty, thousands of young Ghanaians are unemployed. As a matter of fact, youth unemployment in Ghana has reached a worrying point.

It is very difficult to find work in Ghana and in regards to young people, the situation is getting worse, due to the large gap between population growth and employment opportunities.

As a matter of fact, Ghana is not the only country in Africa, facing unemployment issues, for example, in Ivory Coast, around 23% of the population is unemployed; in South Africa 27.3%; in Gabon 18%; in the Gambia 29.8%, etc.

In general, when analyzing the difficulties in Africa, one can easily identify the sources which have generated hardships for the common citizens. Firstly, corruption has drastically affected all the infrastructures in each of the African countries.

Like other African countries, corruption in Ghana is hindering economic, political and social development in the country and this has adversely taken its toll on the low-earned citizens. There is no cheap commodity in Ghana; even common basic amenities are not easily affordable.

The world is rapidly changing and if the youth can no longer stand the pressure and suffering, African leaders may likely face uprisings, revolutions, and crime, if the problem of youth unemployment is not resolved.