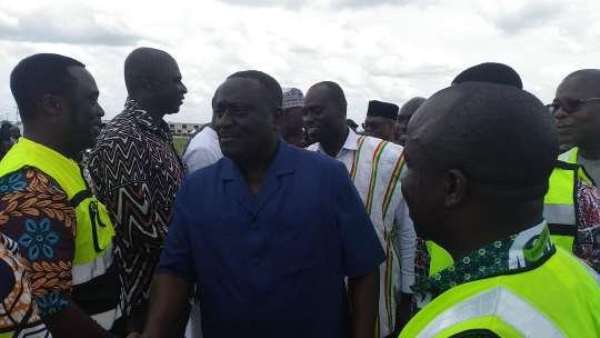 The Wa Airport has officially been opened for commercial flight operations with the first flight; Embraer 145 of the Africa World Airlines (AWA), making historic landing on Tuesday October 15 at 12:25pm hours with 50 passengers on board.

Hundreds of people surged to witness the arrival of the AWA on the Airport tarmac stretching 2000 metres (two kilometres) after several years of non-commercial flight operation in the Region.

Operationalization of the local airport was applauded by indigenes and visitors alike as it seeks to open the floodgate to vast investment opportunities including tourism and ease road transportation challenges such as armed robbery.

The people became more elated when it was announced that a native of the Upper West Region, Mr Victor Pul, First Officer of AWA, piloted the Embraer 145 commercial flight to the new airport.

Mr Pul said it was by dint of hard work, resilience and determination that he was able to rise and achieve his childhood dream of becoming a pilot.

Sharing his experience on prospects for the northern child, he said kids in northern Ghana virtually had no opportunities to be exposed to the aviation industry.

“My greatest hope is that more steps are taken towards demystifying the aviation industry to kids up north,” he said.

Deputy Aviation Minister, Yaw Afful, described the commencement of the commercial flight operation as auspicious and a milestone in Ghana’s aviation sector.

“What we are witnessing today is part of a movement led by President Akufo-Addo and commitment to improve air transport connectivity between the nation’s capital, Accra, and other regional capitals,” he said.

“This is also in line with the Ministry of Aviation strategic policy direction and plan of action to open up the country by air transport to promote economic development and business activities”.

Mr Afful said promoting air connectivity within the country and the West African Region formed part of the Government’s agenda to making Ghana the aviation hub within the sub-region.

The Aviation Ministry and its agencies have taken steps to ensure the country’s airports “operate within the stipulated confines of the relevant International Civil Aviation Organisation’s regulations and recommended best practices”.

Head of Commercial at the AWA, Mr Richard Kyereh, said: “As the de facto home-based carrier, the airline will continue to support government in creating air transport access within Ghana and beyond.”

“We believe… that with the support of our stakeholders and our travel agencies, very soon we are going to commence daily flights to Wa.”

Mr Kyereh appealed for extension of airport closing hours in Tamale to enable the airline to operate more flights in the Northern Regional capital.

He said the company had requested for operating permit to operate within the corridors of La Cote d’Ivoire for almost a year now but had not gotten it.

In the spirit of the West Africa Air Transport market, he implored the Aviation Minister to step in to ensure the airline secured the operating permit.

AWA would fly three times a week to Wa – Tuesdays, Thursdays and Sundays.

“I am happy that AWA is the first airline in the Region to engage in this serious business,” Dr Hafiz Bin-Salih, Upper West Regional Minister, said.

“And this affords us the opportunity to have alternative and faster means of travel and transport service for travellers of diverse backgrounds”.

He persuaded travellers and business persons to patronise the airline for quicker transactions.