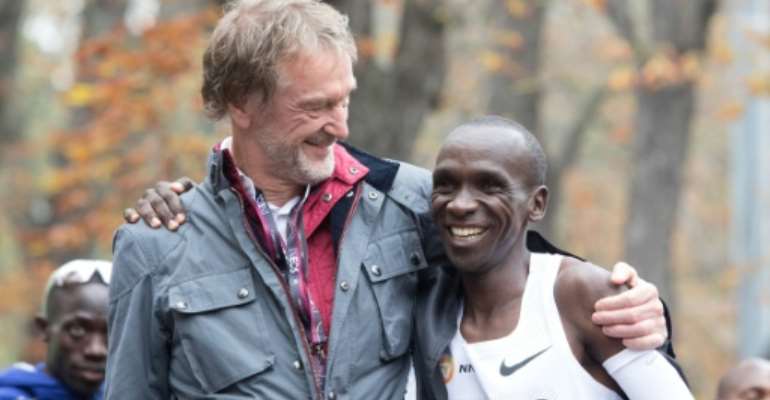 Eliud Kipchoge celebrates with Ineos owner Jim Ratcliffe after the Kenyan broke the two-hour marathon barrier in an event heavily sponsored by the petrochemicals company. By ALEX HALADA (AFP/File)

When Kenya's Eliud Kipchoge became the first man to run a marathon in under two hours in Vienna this month, his performance had been meticulously planned by one of sport's major new players, the petrochemicals giant Ineos.

Founded and 60-percent owned by British billionaire Jim Ratcliffe, Ineos is using its vast profits to roll out a series of cutting-edge sporting projects in top-level cycling, football, athletics and sailing.

"We make six or seven billion dollars a year in profit, so what's wrong with investing a bit of that in sport?" Ratcliffe said recently.

A highly driven amateur sportsman himself, the self-made businessman was on hand to personally congratulate Kipchoge as he crossed the finish line.

With Kipchoge and his pacemakers decked out in Ineos-branded vests as he triumphantly stopped the clock at 1hr 59min 40sec, the brand was broadcast to the four corners of the earth.

The feat has propelled marathon running into a new era, even though the world athletics body IAAF do not recognise it as a world record due to the conditions in which it was conducted. A group of 35 pacemakers worked in shifts to form a V-shaped aerodynamic drag position using expertise that Ineos gained from cycling's peloton, decreasing the impact of the air on Kipchoge's body by 50-70 percent whether there was wind or not.

Research into carbohydrate intake, which is key to enhancing performance in cycling, was also used during Kipchoge's exploit.

Under the slogan "No human is limited", Ineos's efforts, or sports marketing activities, have themselves few limits.

When the 21-year-old Colombian cycling prodigy Egan Bernal won the Tour de France in July he did do under the Ineos banner after Ratcliffe stepped in to sponsor cycling's most succesful outfit, formerly known as Team Sky.

"Sky was the reference in terms of sports performance promoting the name of the sponsor," Vincent Chaudel, founder of France's Observatoire du Sport Business, told AFP of the setup that won five Tour de France titles in six years in the colours of the media company.

Jim Ratcliffe founded Ineos in 1998 and still owns 60 percent of the company. By VALERY HACHE (AFP/File)

Football is also part of the Ineos sports business plan and Ratcliffe, a lifelong Manchester United fan, has been mentioned as a possible future owner of Chelsea, if Russian tycoon Roman Abramovich ever sells the Premier League club. Its Stamford Bridge stadium is close to Ineos's Knightsbridge headquarters.

Having previously bought and so far failed to revive the fortunes of Swiss club Lausanne Sport, Ineos bought French top-flight club Nice in the close season with a view to helping them into the Champions League.

"Lausanne was an investment to be close to the major sports bodies," Chaudel said, noting that the International Olympic Committee are based in the city and UEFA's headquarters are in Nyon, 40 kilometres away. "The Nice investment came with a new stadium that is already built. And the Riviera has marketing potential."

Ineos has also provided Britain's Olympic medal-winning sailor Ben Ainslee with a 110-million-euro ($121.6-million) yacht in a bid to bring the America's Cup back to Britain in 2021.

"The strategy is similar to Red Bull where they are not just sponsors but owners. Look at the marathon, they organised it down to the last detail, mastering every aspect of the operation," Virgile Caillet, the general delegate of' Union Sport & Cycle, a body representing 1,400 sports businesses.

"Ineos is a big international group working in a sector which is not the most virtuous sector. While cycling, running, sailing are all environmentally sound sports."

Ratcliffe, 66, had modest beginnings in a Manchester council estate before attending Birmingham University and the London Business School. He founded Ineos in 1998 and the company now has 18,000 employees and a turnover of 60 billion euros a year.

The company is organised into 20 stand-alone businesses spanning oil refineries, car production and chemicals. It had controversial fracking ambitions in Britain but is now believed to have set its sights on the US shale gas industry after Ratcliffe complained of the British government's "unworkable" rules to prevent earth tremors.