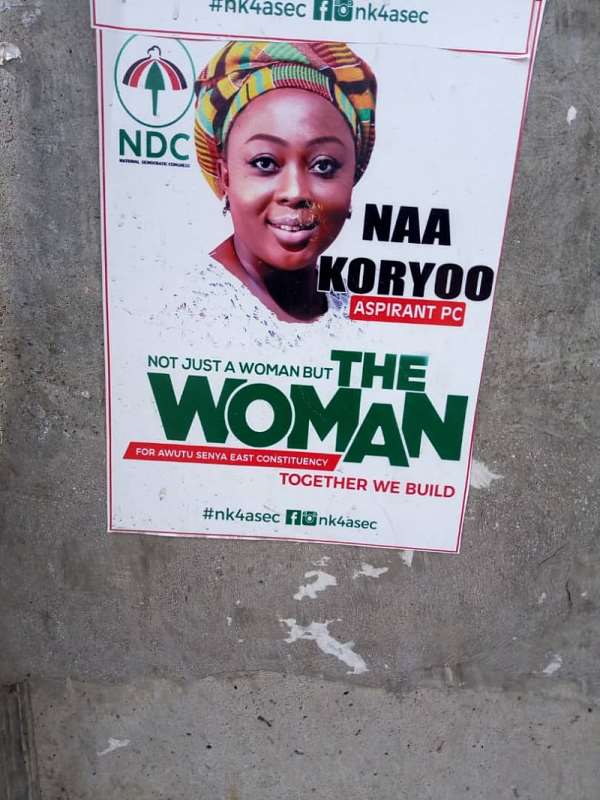 Aspiring Parliamentary candidates who will be contesting for Saturday's elections include Alex Aboge, Lawyer Kanga Kesse,Daniel Kojo Awer, Haruna Tetteh, Perez Laryea and Naa Koryor who happens to be the only female among the candidate.

Some party supporters who spoke to the media say Naa Koryor the only female among the seven candidates is the right candidate to wrestle power from the New Patriotic Party Member of Parliament Mavis Hawa Koomson.

The supporters lament that the Awutu Senya East NDC have had male candidates for a year adding that it is time for female candidate to be tested.

"We have had male candidates for year and it is about time we look elsewhere for famale candidate who will wrestle power from the NPP," some supporters said.

The supporters again lament that the male candidates they have had have not done enough to change the fortunes of the people of Awutu Senya East thus the need to try a famale candidate.

"The male candidate have not done enough to change the fortunes of the NDC in Awutu Senya East so we want to try a woman this time," one supporter explained.

In the Awutu Senya East constituency tensions are high as to which candidate will emerge winner of the NDC primaries but sources close to this reporter say Naa Koryor is the favourite candidate to emerge winner.

The aspirant who wins will have to battle it out with the incumbent NPP MP for the area Mavis Hawa Koomson in the 2020 general elections.