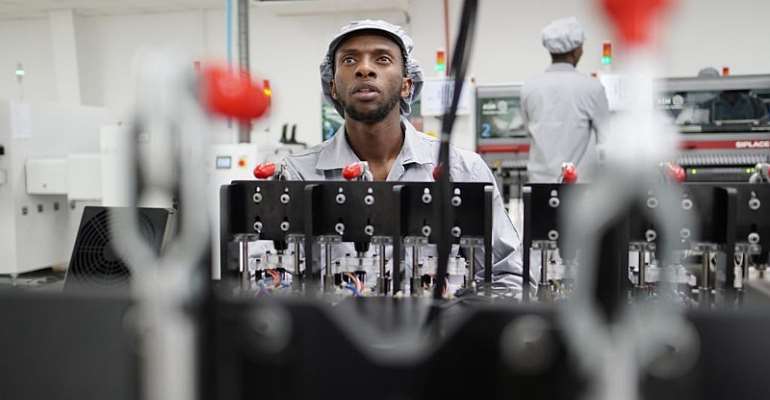 Mara Group's CEO Ashish Thakkar has invited South African president Cyril Ramaphosa to cut the ribbon at the company's smartphone factory in Durban this Thursday, ten days after he flanked Rwanda's Paul Kagame at the opening of Mara's first manufacturing plant in Kigali.

“Korea has Samsung, China has Huawei, the US has Apple and now Africa has Mara,” Ashish Thakkar, Mara Group's CEO says during a WhatsApp call just hours after touching down in Johannesburg. Thakkar and his team of executives are on a marketing blitz of Africa's second biggest economy before officially opening Mara's second smartphone factory on the continent this Thursday. It currently employs 200 people.

Ramaphosa is Mara's guest of honour. It will likely come as a relief to Ramaphosa whose trip to London this week failed to convince potential investors that his government is capable of curbing corruption in South Africa that went unchecked under his predecessor Jacob Zuma.

Thakkar's vision for Mara's expansion is in line with Ramaphosa's election promises of increasing investment and lowering the cost of doing business in South Africa. But competition will be tough for Mara in a market where smartphone penetration has reached 80 percent.

The Chinese-made Hisense U961 is currently the most popular smartphone in South Africa, which sells for 999 Rands or 60 Euro. The South African brand Mobicel, that assembles its smartphones from imported components, is second and third on the list with two handsets that also retail for less than 60 euros.

Mara is being marketed as the first “made in Africa smartphone” in the hope of tapping into a collective sense of pride across the continent.

“The bottom line is people have a sense of pride, and people are proud of being proudly African and buying African,” says Thakkar and continues “as long as the African products that are manufactured locally such as Mara phones do not compromise on quality.”

Kigali connection
It is less than a year since Thakkar announced the launch of Mara smartphones at the Africa Investment Forum in Johannesburg hosted by President Cyril Ramaphosa. Thakkar then returned to Rwanda where he has been based on and off for over two decades, and took full advantage of his government and international connections, including Rwandan president Paul Kagame to whom he has been a presidential advisor since 2014.

Last week Thakkar was whizzing around Kigali ensuring everything was in place before he stood shoulder-to-shoulder with Kagame as he opened what Mara has dubbed, “the first made-in-Africa smartphone” manufacturing plant that also employs 200 people, 90 percent of whom are Rwandans.

Mara's factory is in the heart of the Kigali Special Economic Zone that is the centre piece of the Rwandan government's push to become a technology hub open to the world. 'It's another milestone on our journey to become high tech, 'Made In Rwanda' industry,” Kagame told reporters on the steps of Mara's smartphone plant.

Smartphone penetration is currently only 15 percent in Rwanda. Mara is banking on tapping into projected growth in Rwanda, and the wider region, “Rwanda is ideally placed because the wider region has a population of over 250 million people,” Thakkar explains referring to Rwanda's more populous neighbours DRC, Tanzania and Uganda.

Useful business contacts
Mara smartphones is the latest in a long list of Thakkar's business ventures, a man once described as “Africa's youngest billionaire” by Forbes magazine. However, a protracted divorce settled in a London court and reported on by Britain's broadsheets and tabloids mean that Thakkar is now keen to avoid the billionaire tag.

Whatever his wealth may or may not be, what is certain is that Thakkar is well connected in Africa counting presidents among his personal friends. Another useful business contact is African Development Bank President Akinwumi Adesina. Mara receives financial support from the African Development Bank through its High 5 strategy to industrialize Africa.

Those who know 38-year-old Thakkar well will be waiting to see if Mara Group's foray into smartphone manufacturing proves more successful than Mara Atlas' meteoric rise and fall in Africa's banking sector.