China and US in violent war of words over Hong Kong 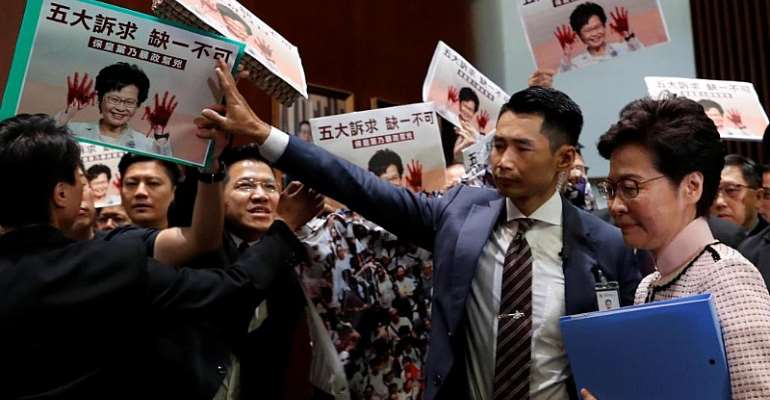 Beijing and Washington, already engaged in a 15-month trade war, have exchanged angry words over Hong Kong, after the US Congress introduced resolutions supporting pro-democracy protesters in the semi-autonomous territory.

Carrie Lam's 2019 Policy Address was to have been an attempt to win the hearts and minds of Hong Kong's population after four months of pro-democracy protests.

But rowdy lawmakers heckled Lam who then decided to broadcast the speech via a video link.

The incident laid bare the intense polarisation dividing the city after weeks of increasingly violent rallies.

Anti-China legislation
A day before the disrupted speech, the US House of Representatives introduced four pieces of US anti-China legislation – a ban on “non-lethal crowd control items” to Hong Kong police, a condemnation of China's “interference in Hong Kong's affairs,” support for “Hong Kong's right to protest,” and an amendment to the 1992 Hong Kong Policy Act.

The amendments allow US President Donald Trump to blacklist those Chinese mainland officials who, in Trump's opinion, have violated certain human rights, including the state-sanctioned kidnapping of any individual from Hong Kong and “arbitrary detention, torture or forced confession”.

“Violent radicals”
Spokesperson for the Hong Kong and Macao Affairs Office of the State Council, Yang Guang, reacted furiously, saying that Congress' statements constitute “a gross intervention in China's internal affairs, a blatant backing for the Hong Kong opposition and violent radicals, and a full revelation of the US House of Representatives' and some politicians' calculations.”

The US measures “only have concrete effect if these individuals have money or financial interests abroad, particularly in North America,” says veteran China watcher Michael Dillon, author of China, A Modern History,

“It could have an effect on businesses in Hong Kong that are relatively close to the Beijing government, if the US decided to consider them to be undermining democracy."

Huawei
In another jab at Beijing the US lower house also “commended,” in a separate resolution issued on October 15, the Canadian government for agreeing to extradite Chinese telecom giant Huawei's CFO Meng Wanzhou, to the US.

Washington accuses Mrs Meng, currently in detention in Canada, of doing business with Iran through a subsidiary, violating anti-Iran sanctions.

“The Huawei case is a complete can of worms,” says Dillon, combining the China-US trade disagreement with Iran and Washington's somewhat chilled relationship with Toronto.

“I think it is only going to antagonise the Chinese government even more,” he says.

Trade deal?
October 15 was a crucial date for US-China trade relations as well: Washington had announced it would increase tariffs on certain Chinese articles to 30 percent, up from 25 percent.

The measure did not materialise because negotiations are ongoing and Trump has voiced some optimism that a trade deal would be possible by the December 15 deadline.

But Dillon is skeptical. “This just illustrates the real problems with American so-called diplomacy. We've had this before, where there have been threats of a massive increase in tariffs. And then it hasn't happened or it was announced from the White House that this was going to be rescinded because of some personal link between the President and Xi Jinping.

“It does seem to be threats and bullying rather than professional diplomacy. This really doesn't help,” Dillon says.