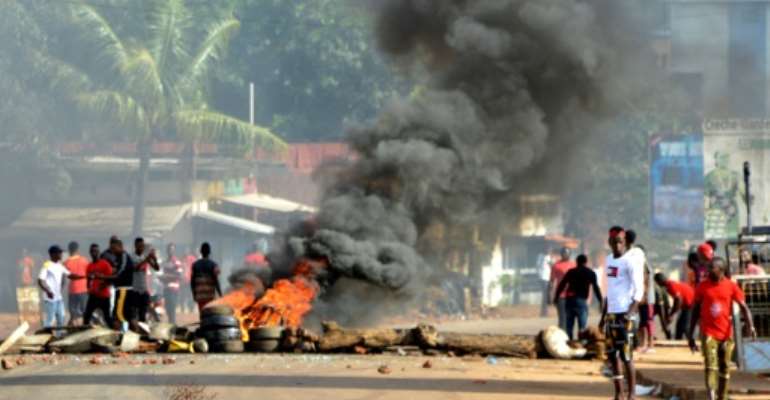 Protests have rocked Conakry and other cities earlier this month over Conde's bid to overturn term limits and run again. By CELLOU BINANI (AFP)

Deadly clashes erupted this month during opposition protests against Conde's push for constitutional changes that critics say aim at letting him to run again.

The eight opposition leaders belong to an alliance of unions, political parties and civil society groups called the National Front for the Defence of the Constitution (FNDC) which formed in April and has appealed for a massive turnout in rallies.

They were arrested on Saturday and charged with making statements to disturb public order by calling for protests, according to the prosecution.

Their lawyer, Salifou Beavogui, told AFP during a break in the hearing that a verdict was expected later on Wednesday. He said he expected his clients to be "punished".

They all face sentences ranging from three to five years.

"We are pleading not guilty," the lawyer said.

Clashes have erupted in the capital Conakry and other cities since Monday, killing at least six people among the demonstrators, according to relatives and doctors who say they were shot dead by the police.

But the government said security forces did not use firearms and confirmed only the death of one Conakry resident and a gendarme.

Conde has in the past drawn criticism over the police's deadly use of gunfire to quell demonstrations. About 100 people have been killed since he came to power in 2010, according to the opposition.

Last month the Guinean leader called on the public to prepare for a referendum and elections, raising speculation that he was planning to overcome the constitutional ban on a third term in office.