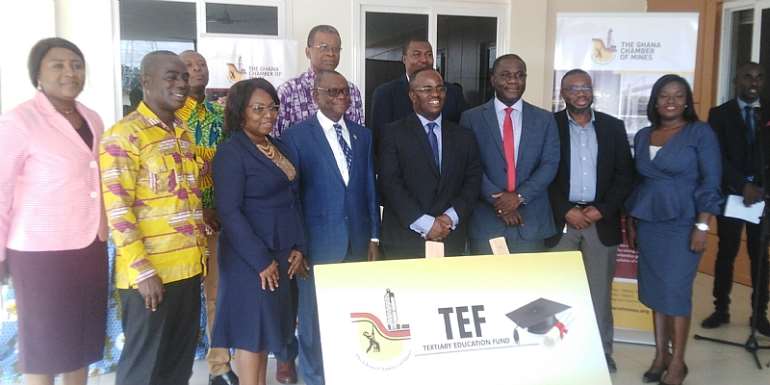 The Ghana Chambers of Mines says it has allocated an annual contribution of USD$442,000 to the newly launched Tertiary Educational Fund for five years.

It said the move is aimed at keeping the country’s mining industry on an increasing course with a regular stream of highly qualified astute professionals.

According to the President of Ghana Chamber of Mines, Eric Asubonteng, the launch is a realization of idea signals which forms part as key steps in the Chamber’s effort in supporting development of skills.

Speaking at the Launch of Ghana Chamber of Mines’ Tertiary Educational Fund, Mr. Asubonteng said “As part of the Chamber’s effort in supporting Ghanaian sills in the resources industry, this fund is also aimed at keeping Ghana’s mining industry on an upward trajectory”.

He further added that the fund like most globally recognized finds is specifically aimed at keeping Ghana on top of the chain of mining destinations in Africa.

Mr. Asubonteng also disclosed that it is well recognized that any successful economic development strategy must focus on improving the skills the area’s workforce as well as reducing the cost of doing business.

“What pleases me most is the overwhelming support received from our member companies when the idea of instituting the fund was proposed.It shows the contrary to the misconceptions that investors do not focus on the bottom-line,” he stated.

Chairman of the Governing Board of the Ghana Chamber of Mines’ Tertiary Education Fund, Stephen Ndede hinted that across the world, higher education is facing unprecedented challenges in funding and Ghana is not an exception.

He noted, “Although the University of Mines and Technology (UMaT) bears our name and is identified with us as an industry, all across the world higher education is facing unprecedented challenges in funding and Ghana is not an exception”.

He also added that conversation about funding higher education in Ghana has been going on for a while especially for UMaT but very little has been done to address the real concerns.

Mr. Ndede however revealed that as a chamber whose members were major beneficiaries of the products from UMaT, the image of the industry will plummet if the University continues to reel under lack of infrastructure.

“Mr. President and Members of the Board, we promise to administer the fund judiciously to achieve the desired results,” he assured.

Chief Executive Officer (C.E.O) of Ghana Chamber of Mines, Sulemanu Koney commended the membership of the Chamber for continually proving that when businesses operate sustainably, they are able to contribute invaluable resources to the socio-economic development of host nations.

“UMaT has developed the innovative direct ore smelting method, which is also known as ‘Sika Bukyia’. This technology, which was developed by researchers from the University is a more sustainable and environmentally friendly method to process ore for small scale operators,” he emphasised.

Mr. Koney revealed that the source of revenue for the fund which will be administered in phases primarily from the producing member companies of the Chamber who intend together contribute USD$400000 annually for five years.

He further added that an additional contract mining and explosives manufacturing member companies shall contribute USD$3,000 and USD$2,000 respectively annually for five years.

He reiterated that the fund shall specifically applied to support teaching and learning, research of faculty and post-graduate students related to industry needs.

“It will cover bursary for under-graduate students according to industry needs, provision of educational resources and Industry Internship programmes” he noted.

The Ghana Chamber of Mines’ Tertiaty Education Fund is an initiative borne out of many years of practical partnerships between the chamber and Tertiary Institutions in the country, particularly, the University of Mines and Technology (UMaT). These partnerships ranges from the Chamber serving on the highest- decision-making body of UMaT(i.e The Governing Council) to the creation of the Chamber’s Environmental Science Chair at the University.