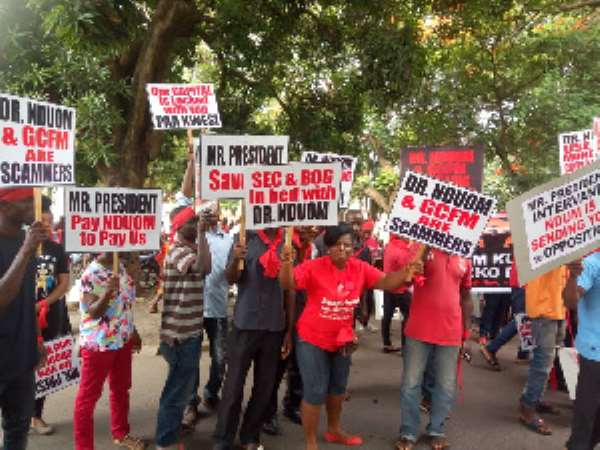 The Aggrieved Customers of Gold Coast Fund Management have called on President Akufo-Addo to seize and sell properties of Dr. Paa Kwasi Nduom to defray their locked-up funds.

The group believes that this step will help them retrieve their locked-up funds in the company of DR Nduom.

The aggrieved customers numbering over 400 took to the streets of Accra to register their displeasure about how their funds have been allegedly embezzled by the founder of the company.

There was an uneasy calm at the Jubilee House as some aggrieved customers of Gold Coast Fund Management refused to give out their demonstration petition to a representative from the office of the President.

The group declined to give their petition to the Minister of State at the Office of the President, Dr Kwaku Afriyie who was designated from the president’s office as they demanded a higher person whom they will hand over the petition to.

Speaking to Journalists when presenting the petition to the office of the President, PRO for the Customers, Charles Nyame called on President to initiate the process in the confiscation and sale of the properties to help repay them their funds.

”We want the government to seize and sell properties of Gold Coast Fund Management to pay us, we need our money urgently.”

He also called for the immediate dismissal of the CEO for the Security and Exchange Commission (SEC) for looking unconcerned to allow Dr. Nduom to transfer their cash out of the country and again allow him to walk a free man.

Just after the demonstration, Chairman of the Groupe Nduom under which the Gold Coast Fund Management operates, Dr. Paa Kwasi Nduom has expressed disappointment in the demonstrators for trying to destroy his reputation saying his company has already been paying customers locked up funds.