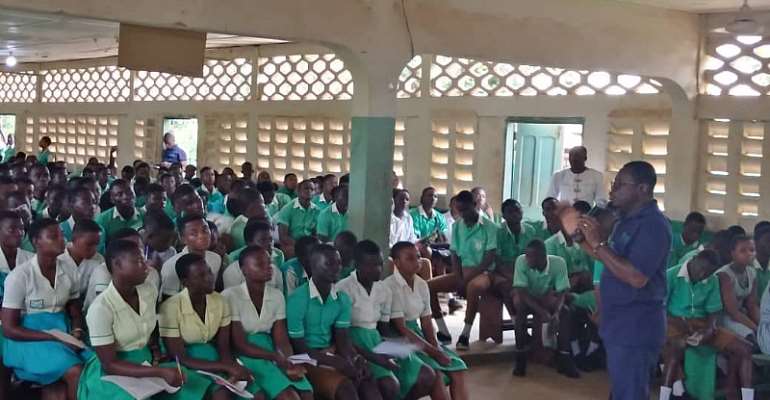 The youth have been advised to activate all relevant safety precautions when using the internet so as to avoid breaching protocols on internet safety. Some identified risks associated with internet usage include exposure to child pornography, sextortioning, cyberbullying, malicious information gathering, romance fraud, mobile money fraud, among others.

The Head of Technical and Cybercrime Unit at the Economic and Organized Crime Office (EOCO), Mr Jacob Puplampu, who gave the advice on Monday during a presentation to students of Ahafoman Senior High School at Goaso in the Ahafo Region as part of this year’s Cybersecurity Awareness Month, also urged the students to go beyond using the internet for social media purposes only.

He said the internet is a good tool for acquiring knowledge, research and promoting development, however, most people in Ghana have resorted to using it mainly for social media related activities only. This according to him is not making the country derive the needed benefits from internet usage.

In the wake of increasing cybercrime-related activities in Ghana, Mr. Puplampu said as much as people enjoy being in the cyberspace for obvious reasons, it has become necessary for people to take their personal security in that space very seriously so they won’t become vulnerable to “online predators”.

He emphasized the point that safety and security of the user should never be compromised when using the internet in any form.

On precautionary measures that a user should take when online Mr Puplampu emphasized the need to sieve the amount of personal information one releases onto the internet.

“Be careful the level of information you upload onto the internet as it can be used to track you down or sabotage you now and in the near future. You must put measures in place to ensure that you are protected from a cyber disaster,” he cautioned.

On how to prevent a cyberattack, he advised the students on the use of strong passwords; the need to mindful of what they post on the internet; avoid the sharing of nude pictures in any form; reject friend requests from strangers; and staying away from sharing bad messages.

He encouraged the students to report all suspicious cyber issues to the newly launched cybercrime/cybersecurity incident reporting points of contact by calling or sending SMS to 292 on all networks or send a Whatsapp message to 0501603111.

With an average time of 3 hours and 7 minutes per day, Ghana ranked 9th on a Global Survey on Social Media Usage which was released in January 2019, beating countries like USA, Switzerland, Italy, Sweden, Canada, Hong Kong, which ranked 24th, 28th, 30th, 31st, and 32nd respectively. Japan is at the tail end of the ranking with an average usage time of 36 minutes.

“Almost all these countries are much more developed than Ghana, however, when it comes to the use of the internet and social media, you’ll realize that we are far ahead of them. This should tell you that Social Media usage alone does not guarantee development,” Mr Puplampu stated.

He advised the students to go beyond social media and use the internet for research, academic work, and for building their capacity.

“Use the internet to do things that are profitable,” he stated.

Minister for Communications, Honourable Ursula Owusu-Ekuful launched this year’s Cyber Security Awareness Month in Accra on October 1 as part of the national efforts to raise awareness on cybercrimes and cybersecurity with particular emphasis on demonstrating Ghana’s cybersecurity readiness among children, the public, businesses, and government.

Teams of experts in cybersecurity have been deployed to all 16 regions of the country, into senior high schools and communities to sensitize the populace on cybersecurity consciousness.

It is part of a national campaign dubbed “A Safer Digital Ghana” included in the National Cyber Security Awareness Programme (NCSAP) launched by the Vice President Dr Mahamudu Bawumia in 2018.

The team which is currently in the Ahafo region is also scheduled to interact with some selected schools of the Bono Region and Bono East Region.